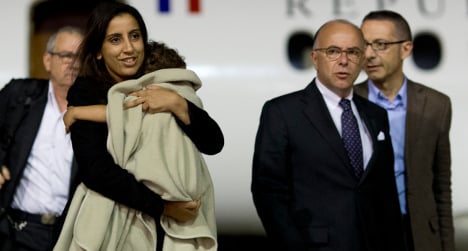 Meriam Rhaiem, 25, made headlines in March with an emotional appeal to French authorities to recognize her baby girl as "the youngest French hostage".

Mother and daughter arrived at Villacoublay air base outside Paris at 2:15 am Wednesday (0115 GMT) aboard a plane chartered by the French interior ministry.

"It's a moment of great emotion with the arrival of Meriam Rhaiem and her daughter Assia, after months of waiting," said Interior Minister Bernard Cazeneuve who went out onto the tarmac to meet the plane.

"The trials this young woman has endured, fighting hard for the return of her daughter who was kidnapped in circumstances which we aren't clear," he added.

He thanked the Turkish authorities for their role in the family reunion which led to "the best possible outcome".

Rhaiem, holding her child in a blanket and flanked by her lawyer who was also on the plane from Turkey, made no comment upon her arrival.

Rhaiem, who lives in eastern France, had said she was certain her French husband, who she is divorcing, and who is wanted under an international arrest warrant, was in Syria where he was seeking to join jihadists.

The father was arrested last weekend with their daughter Assia in Turkey, where he is still being held, a French interior ministry source said.

Assia's father had failed to bring his daughter home after spending the day with her in October last year, and had left France by road bound for Turkey, from where he called his wife regularly and asked her to come and join them.

He had also said he planned to cross into Syria with their daughter to join the Al-Nusra Front, which is Al-Qaeda's official Syrian affiliate.

According to Rhaiem's lawyer Gabriel Versini-Bullara, her husband had become radicalized after travelling to Mecca, asking her to wear the veil, criticizing her for working or banning her from playing music to Assia.

Like a number of European countries, France has expressed concern over radicalized people leaving the country to fight in Iraq and Syria, with fears that they could pose a risk to domestic security on their return.

France unveiled a bill in July aimed at stopping aspiring jihadists from travelling to Syria. It includes a ban on foreign travel of up to six months for individuals suspected of radicalization, and gives authorities powers to temporarily confiscate and invalidate their passports.