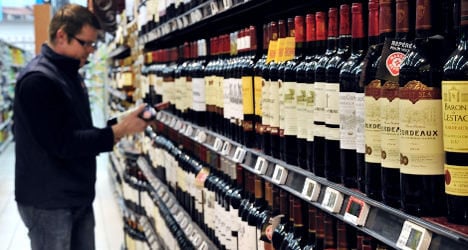 Most French people know nothing about wine, a new survey has revealed. Photo: Philippe Huguen/AFP

If you want to learn about wine then there’s no better place than France, or at least that’s what we’ve been telling ourselves.

But according to a new survey the French may not actually be the connoisseurs of le vin that we all thought they were, or not all of them anyway, as TF1 reports.

Responding to the question: "Do you have the feeling you have a good knowledge of wine?"as many as 71 percent of French people admit they don't know about wine, according to a poll carried out by ViaVoice for the Magazine Terre des Vins.

And when asked how much they knew about the famous tipple as many as 43 percent of respondents replied "nothing at all" or not a drop.

Only three percent were confident enough to say they “know a lot” and 26 percent believed they “knew enough”.

The study suggested that knowledge of wine among French people depended mostly on the social class, they were part of.

Eight tips for buying wine in a French supermarket According to ViaVoice the results of the survey is evidence that the approach to wine in French society is still "very elitist". Plus as household budgets are squeezed, many simply do not have the money to get hold of a bottle of fine wine.

But wine is seen by many as an alternative to the excesses of “le binge drinking”, the Anglo culture of drinking a lot in a short space of time, which has taken hold among France’s younger generation in recent years.

Half of respondents to the survey would like young people to undergo a course about wine to help dissuade them from drinking in excess.

“Faced with the phenomenon of binge drinking and heavy consumption of alcohol among young people the more civilized wine constitutes an alternative in terms of health and culture,” said Terre des Vins.

Whether they know a lot about it or not, it’s clear the French still love a good bottle of plonk.

According to figures from 2011, the average French person drinks just over a bottle a week, six times more than the average US consumer.

And as many as 78 percent of respondents supported a move by French senators in March which made wine part of France’s cultural and gastronomic landscape, granting it special protection.