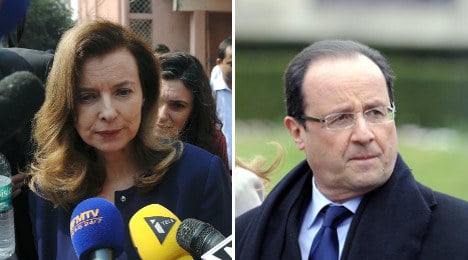 Valerie Trierweiler has a potentially brutal book coming out on her time with President François Hollande. Photo: AFP

As if Hollande didn't have enough problems on his hands with the stagnant economy and various political crises, he's now threatened by a forthcoming memoir from his ex "first lady."

With zero advance publicity thus far, Valerie Trierwieler's memoir of her 20 months at the Elysée Palace titled "Thank you for this moment," (Merci pour ce moment) is to hit bookstores on Thursday.

For now, the only hint given about the shape of the book is from a journalist at France's Parliamentary TV channel LCP who said the tome won't "spare" Hollande. Though the LCP report also notes the book doesn't concentrate on settling scores.

However, Trierweiler's story certainly has the makings of a revenge tale. After the 49-year-old former Paris Match reporter fell for candidate Hollande she wound up France 'Premier Dame" in 2012, though no such title exists.

But everything changed in January when tabloid Closer magazine published a photo exposé showing Hollande was carrying on an affair with a younger actress named Julie Gayet. published pictures of Hollande arriving for secret trysts with the actress at a borrowed flat.

Trierweiler ended up hospitalized from the shock and was eventually dumped by the president as she was recuperating. Thus ending her short a turbulent time in the Elysée.

Hollande then announced their relationship was over in an 18-word statement that was devoid of regret or remorse for the woman he had described as "the love of my life" in 2010.

"Eighteen words is almost one word for each month we spent together since he was elected," she told Le Parisien daily in January, describing herself as "more disappointed than hurt".

However, there may be little incentive for Trierwieler to be boldy brutal and personal, after all she still has a place in France's media and political elite. Too much of a bad thing might not be good for her either.