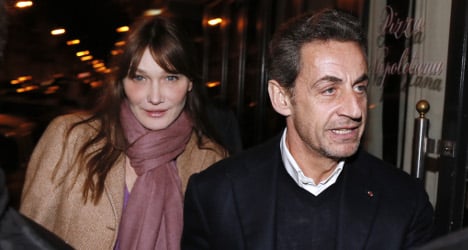 Carla Bruni-Sarkozy does not want her husband to return to politics, according to reports. Photo: AFP
France and particularly its media are gripped by suspense this autumn over whether Sarkozy will finally announce whether he will run in the presidential elections in 2017.
News of his imminent return regularly hits the headlines, but so far the former "bling bling" president has declined to officially throw his hat into the ring.
But if his wife Carla Bruni-Sarkozy gets her way, he may never actually join the fray as expected.
Le Parisien newspaper reported this week that during a recent holiday to Bali, Bruni reacted furiously at the prospect of her husband going back to the cut throat world of French politics.
Friends of the couple were quoted as saying that she had confronted Sarkozy during their holiday, begging him not to run for president.
One friend was quoted as saying that “Bruni had been very hurt by the meanness of people and by all the criticism when he was president, now she just wants them to live quietly and peacefully, out of the public eye."
Sarkozy said before the summer he would make a statement in the autumn and many predict it may come around the time of September 18th.
That’s the day President François Hollande will hold his six-monthly press conference. Any statement by Sarkozy suggesting he will return will naturally grab all of the attention. Sarkozy’s allies say this could be a good strategy, and would make him appear to be the president’s main opponent.
However, his return still remains hypothetical, and much may depend on Bruni as well as his list of legal woes, any one of which has the potential to derail his comeback.
Former Prime Minister Alain Juppé has already thrown his hat into the ring to become the presidential candidate of Sarkozy's centre-right UMP party. Another former UMP PM François Fillon is also expected to be a candidate.
by Lea Surugue