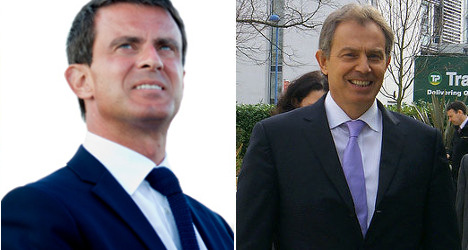 Spot the difference. Or maybe there isn't any between Manuel Valls and Tony Blair? Photo: AFP

Ever since France’s prime minister declared his love for business and nominated a former Rothschild banker as his new economy minister last week, the number of comparisons likening him to former British Labour Prime Minister Tony Blair have been coming thick and fast.

Socialist MP Laurent Baumel even accused the Prime Minister of “copying and pasting” one of Tony Blair’s speeches.

To see if the comparison really does fit, The Local has asked Marc Lazar, a specialist of the left and social-democrat movements in Europe, from the Institut d'études politiques de Paris (Sciences Po), to help compare.

Ideologically, Valls and Blair appear to share a lot of values. Both clearly embrace a pro-business attitude. Valls is clearly inspired by Blair as he battles to convince his parties that his policies are legitimate, and that in order to fight poverty and exclusion, wealth has to be created. “What Valls says is not new and has been accepted by the Labour Party ever since the Blair experience,” says Lazar. “He basically says that socialists cannot re-distribute wealth and fight inequalities if they do not create wealth first. He even provokes them, asking them what party they would be if they rejected firms that create jobs and wealth, for them to distribute to the poorest”.

On the burning topic of public safety and security, Valls also borrows from Blair’s tough attitude. The British Prime minister often said he was fighting a “war on crime”, and Valls, whether as Mayor of Evry or as Minister of Interior or PM, has made security a priority. (Valls after his speech to Socialist Party members at La Rochelle this week. Photo: AFP)

“Valls’s logic is similar to Blair’s. They think that people from low income families are more affected by crime and by insecurity. His idea for example is that a poor family which works hard and saves up to buy a car will suffer more if it gets stolen,” says Lazar.

However, the two men have very different approaches when it comes to their relationship with the right. Valls uses the division with the centre-right UMP party to unify the Socialist Party. But for Blair, left and right did not make much sense anymore, Lazar says. “He believed in the importance of going beyond left and right."

Lazar points out that the two men are not so different when it comes to style. Both share a good deal of pragmatism and realism, as they prefer to adapt to the changes of a society, becoming more individualist, more educated, and more globalized.

Both believe good communication skills are important and expose themselves to media scrutiny, most of the time with a successful outcome. They believe in what Lazar calls “a democracy of audience”, in other words convincing the public and communicating their policies clearly is what’s important in order to gain support.

“Both are great public speakers. Just look at Valls’s speech at La Rochelle. He arrived in a room full of hostile socialists, but managed to turn the room around and to be applauded throughout his speech. Blair was also great with words; and very witty. During the Iraq war, when he lost a lot of popularity, he still managed to make his speeches successful," Lazar says.

In short, both are natural leaders, with authority and charisma, although Valls’s image seems to have suffered from President Hollande’s lack of popularity. (Valls (left) has also been compared to Nicolas Sarkozy (right). Both seen here at a meeting about crime back in 2006. Photo: AFP)

Blair and Valls are two men with a lot of similar ideas. But, surprisingly perhaps, they do not come from the same worlds.

Blair took a typical British route into politics, from starting out in a private school before going on to study law at the University of Oxford. Spanish-born Valls however was educated at state schools before studying history in Paris I-Tolbiac University.

He belongs to a young generation of Socialist Party members who entered the world of politics early and unlike many French politicians, including Hollande, Valls did not go the prestigious graduate school ENA.

Valls’s conception of integration is closely linked to his own family background. He is the son of a Spanish immigrate, and although he was raised in France, he only became a French citizen aged 20.

For Lazar this means that “he profoundly believes in the republican model of integration, meaning secularism and republican beliefs are at the core. Blair is a more traditional man, a devout Christian. He respects the different communities, and wants them to integrate through work.

One thing they do share in common though is their ability to speak French. See the video below.

Ability to reform their party:

The debate in Europe around “the third way” was one of the most important in the history of the left. It was pushed by Chancellor Gerhard Schröder in Germany and by Blair in the UK in the nineties and early 2000s. But the French socialist party refused to take part in it, except for some of its members, one of whom was Valls.

But today, even if he wants to, reforming the French Socialist party will be a lot harder for him than it was for Blair, Lazar says. In the seventies the Labour Party was closely linked to unions and workers, but even before Blair came about, things had begun to change, under previous leaders.

Under Blair, the reformist forces won over the Labour Party, with the key event being what is known as “the Clause IV moment”, which was seen as a symbolic break from the old left.

For France’s Socialist party’s philosophy is deeply rooted in historical tradition, in the heritage of the revolutionary and radical left and has up until now rejected any kind of such reform.

“Manuel Valls belongs to a minority in the socialist Party. He can use his role as Prime Minister to make his ideas heard, he can try to set the party on a new course, but whether he is capable to modernize it and to reform it in depth, I am not so sure” concludes Lazar.