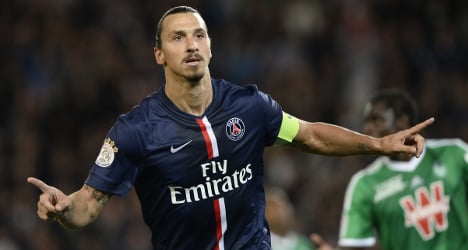 Champions Paris Saint-Germain thumped Saint-Etienne 5-0 as Bordeaux saw their 100 percent record at the start of the Ligue 1 season ended on Sunday with a 1-1 draw against Bastia.

Zlatan Ibrahimovic scored a hat-trick and strike partner Edinson Cavani also netted as the big-spending Parisians ran riot in the capital to move up to second.

But they were given a huge help[ing hand by Saint-Etienne goalkeeper Stephane Ruffier who failed to control a back pass on 24 minutes, turning the ball into his own net as he tried to the steer it on to his right foot but instead pushed it over the line.

Ibrahimovic notched his first four minutes before the break with a firm header from Maxwell's left-wing cross.

He doubled his tally as he ran on to a wayward back pass on 62 minutesbefore rounding Ruffier and slotting into the empty net.

A minute later Cavani lashed in an unstoppable drive from distance that left Ruffier rooted to his line.

Ibrahimovic completed his hat-trick on 72 minutes after beating a static offside trap and slotting the ball past Ruffier at his near post.

Earlier, Bordeaux, trailing 1-0 to a first-half strike from Ivorian forward Junior Tallo, were let off the hook when Floyd Ayite's net-bound strike with quarter of an hour remaining was deflected onto the bar by the hand of home defender Nicolas Pallois.

No penalty was given and instead Bordeaux drew level in the 79th minute thanks to Diego Rolan's third goal of the season.

"From the bench, everything happens so fast that you can't see," said Sagnol of the penalty incident. "But it would be a shame to reduce the match to just that.

"It wouldn't be right to say that a team was lucky because of one incident when that team was the only one trying to play football," added Sagnol, who was hoping to become the first coach to win his first four Ligue 1 games for 36 years. Made a mistake

Bastia, who were wearing white Bordeaux training tops after bringing the wrong kit to the Stade Chaban-Delmas, opened the scoring on 18 minutes when Tallo fired home from eight yards after Ayite's miscued header fell into his path.

Bastia coach Claude Makelele could only look on as Mariano's ball into the box was chested down and then fired home on the turn by Uruguayan forward Rolan.

"As I said to the referee, these things happen so fast," said Makelele of the penalty controversy. "He made a mistake and has admitted it. I'm satisfied with that."

Meanwhile, Lyon's poor start to the season continued as they threw away a lead to lose 2-1 at promoted Metz.

France striker Alexandre Lacazette tapped in to give Lyon the lead midway through the second half at the Stade Saint-Symphorien, only for Yeni Ngbakoto to equalise with a penalty in the 82nd minute after Jordan Ferri was adjudged to have fouled Bouna Sarr.

The late turnaround sealed a dreadful week for Lyon, who were knocked out of the Europa League play-offs by Romanian side Astra Giurgiu in midweek and have now lost three Ligue 1 games on the bounce.

On Saturday, Monaco came from behind to draw 1-1 with Lille as Dimitar Berbatov cancelled out Nolan Roux's opener, but the Principality club's day was overshadowed by the late withdrawal from their squad of Radamel Falcao amid mounting speculation that the Colombian is on his way out of the club.

There were also wins for Rennes, Lorient, Nantes, Toulouse and Lens to go along with a 4-0 victory for Marseille on Friday against south coast rivals Nice.