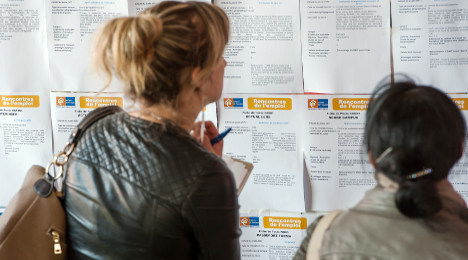 How does France compare to its neighbours when it comes to unemployment.Photo: Philippe Huguen/AFP

This week France's labour ministry revealed there were now 3.424 million people out of work, a rise of around 26,000 on the previous month. It was the ninth consecutive rise in the monthly unemployment figures.

Over the other side of the Rhine Germany has much better news to report when it comes to unemployment. Jobless rates over there have been stable for some months. According to Eurostat data, the rate of unemployment stood at 4.9 percent in Germany for July 2014.

Tomasz Michalski from HEC Paris school of management, points to the structural reforms to Germany's labour market that were carried out in the early 2000s, which has allowed Berlin to keep unemployment below its pre-crisis level of 7.5 percent.

"Basically you have hundreds of thousands of people employed in these so called "mini-jobs" (employment that allow people to earn up to €450 a month, but do not come with core benefits). These people would basically be unemployed in France," says Michalski.

He also says Germany's system of training blue collar workers on the job, helps many low-skilled workers who leave school without qualifications, find work. "That's unlike France where tens of thousands leave schools each year with no qualifications and no hope of finding work," he said.

Michalski also points to the 35-hour week, higher payroll taxes and employers' reluctance to hand out permanent CDI contracts as other reasons for the high unemployment in France compared to Germany.

Much of Europe casts jealous eyes at the UK when it comes to their unemployment figures. In the second quarter of 2014, the British economy saw growth of 0.8 percent and now expects growth of 3.2 percent over the whole year.

Unemployment, which has been steadily decreasing stands at 6.4 percent compared to around 11 percent in France.

“During the crisis, the UK decreased working hours and played with wages in developing ultra-flexible zero hour contracts where there is no minimum working hours,” Eric Heyer from the French Economic Observatory told Le Figaro. “This partly explains the low level of unemployment today," he said.

Le Figaro newspaper points out that the “cherry on the cake” for the UK is that more than one million jobs have been created in the in the last six years, “compared to France which has seen 515,000 destroyed”.

HEC's Michalski says that the UK's reaction to the crisis was to lay off workers, "which was short term pain". In France however big firms did not restructure after 2008. "Everything was delayed," he said. Hence the number of companies who been forced to lay off workers in the last two years including Peugeot-Citroen.

"Again the UK has a much more supple labour code than in France," HEC's Michalski said. "But it is also much better than France at integrating immigrants into the employment system. If you go to a poor part of Paris, like Saint Denis, it's full of poor immigrants who can't find work."

The country has been under severe austerity measures for several years and unemployment has fallen over the last year.

Recently Spain posted its best second-quarter growth rate, since the beginning of the crisis (0.6 percent) and unemployment in the second quarter fell by 310, 400 to around 5.6 million. Figures released by Eurostat for July showed that compared to the same month last year, unemployment has fallen from 26.2 percent to 24.5 percent, which is the highest in Europe behind Greece (27.2 percent).

Michalski says that the adjustment to the crisis in Spain was harsh which is why unemployment levels rose so steeply. The collapse of the construction industry greatly added to the numbers out of work.

The French Economic Obervatory's Heyer says given the sheer numbers out of work it's not surprising that unemployment has decreased slightly, where as Michalski points to reforms made to make the labour market more flexible, also helped stem the rise in unemployment.

Both analysts however believe the jobless rate in Spain will remain high for the foreseeable future or "at least until Spain can find some way of creating jobs for its millions of low-skilled workers," says Michalski.

“The job market is stabilizing, though a significant drop in unemployment rates is not expected until 2015," Intesa San Paolo bank said after the figures were released.

Prime Minister Matteo Renzi has promised his "jobs act" will help young people in particular as Italy attempts to pull out of the deepest recession since the Second World War.

"Italy is in exactly the same position as France," says Michalski, suggesting that much-needed reforms to the labour market are yet to be made.

"Former Prime Minister Mario Monti's reforms had little effect. The new Prime Minister is trying to do make some reforms, but basically Italy is like France, except it has a much bigger debt burden."