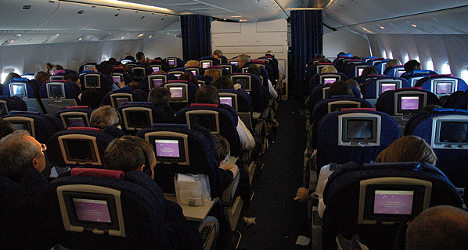 A Frenchman freaked out on a US plane over a reclined seat and is in big trouble. Photo: Doug/Flickr

A Frenchman faces six months in jail because he flew into a rage when the passenger seated in front him reclined his seat during a flight from Miami to Paris.

Edmund Alexandre, 61, became so angry at his fellow flyer, that he ran after and grabbed the man before finally being handcuffed by an air marshal aboard American Airlines Flight 62.

The noisy and violent outburst forced the pilot to make an emergency landing at Logan International Airport in Boston, where Alexandre was arrested on Wednesday and then taken to a hospital for a psychiatric evaluation, CBS Boston reported.

Massachusetts prosecutors subsequently charged him with interfering with a flight crew, which carries up to six months behind bars if he’s convicted.

This "air rage" incident came just days after a brawl broke out on a United Airlines flight because of the position of a seat. A passenger tried to recline his chair, but was prevented from doing so because the flyer sitting behind him had installed a “Knee Defender.”

What started as a verbal confrontation between the passengers quickly escalated into physical violence.

The "Knee Defender", prohibited by many airlines, is a gadget that once attached to the arms of a tray table stops the seat in front of it from reclining. It has become a sort of self-defence tool for flyers fed up with the ever shrinking leg room aboard commercial airliners.

The incident prompted a media debate about whether people have the right to claim and protect their space on a plane. Though it's also become a reminder how spartan conditions have gotten on modern commercial airliners.

SEE ALSO: Parisian thrown off flight 'because he smelled'