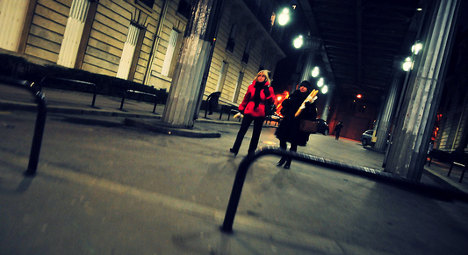 A third of French women say they are afraid to walk in their neighbourhood. Photo: Takato Marul/Flickr

The study reported that over a third of women in France feel “a sense of insecurity” when walking in their own neighbourhoods, compared to only one in five who feel afraid when walking in town and city centres.

This is a figure that has risen in recent years according to the report by Onzus (National Observatory of Sensitive Urban Zones).

In a separate study of over 10,000 women living in Paris, 69 percent reported feeling afraid "at least occasionally" when walking alone in the evening.

The study has provoked a debate about gender equality in the country at a time when the government has taken steps to reduce disparity.

Reacting to the study Sylvia Zappi, a journalist for Le Monde, described public spaces in France as “gendered places” where women do not share “the same freedom of movement”, particularly in the suburbs of larger cities.

The geographer Yves Raibaud sees this as a direct outcome of government funding: 75 percent of the budget for public recreational spaces is spent on typically male activities, such as pétanque, skateboarding, and football.

Raibaud says inequalities are implicitly built as a way of managing cities that are "built for and by men".

However he does concede that: "We do not advise young women to jog in secluded areas, to be on their guard on public transport and to avoid certain neighborhoods."

A collective based in Aubervilliers, a poor neighbourhood in northern Paris, called ‘Place aux femmes’ (A space for women) is seeking to change this, by promoting mixed-gender environments in what they perceive to be typically male spaces, such as cafés or bars.

Its founder, Monique, a retired teacher, began the group after noticing that all the terraces of the cafés in her area had only male clientele.

“They looked at me as if I didn’t belong there. I found it unbearable,” she told Le Monde.

Now, she and a larger group of women visit different bars and cafés in the area once a fortnight, wearing spotted scarves as signs of the movement. She hopes that other women seeing them there will in turn feel more at ease in the public spaces of their home town.

Gender inequality in France is not limited to its streets and pavements.

It comes 45th in the world for gender equity, as is one of the lowest in Western Europe, with particularly poor performance in Political Empowerment and Economic Participation and Opportunity, and last in the region for equal pay.

But the French parliament recently passed a new law aimed at boosting equality that touched on various issues from pay to parental leave.