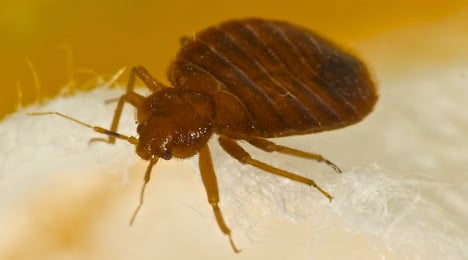 France’s health authorities are overwhelmed by a wave of bedbug infestations throughout the country, at the worst levels it has ever known, according to a report in the Nouvel Obs newspaper.

Dr. Pascal Delaunay, an entomologist at Nice hospital said: "Since the late 1990s, the infestation of large cities by bedbugs has not stopped increasing. Today we in a situation that our generation has never known."

Bedbugs live in the crevices of fabric and other soft materials, and so often stowaway with international travellers in luggage or the folds of their clothing.

In the most severe cases, they can be extremely damaging: earlier this month, one infestation in Ivry-sur-Seine rendered the family’s four-bedroom apartment uninhabitable.

In Alsace, an entire block of fifty-three apartments had to be treated after nine flats became infested, with all of the building’s residents obliged to move their belongings out for the day.

Over the border in Switzerland, authorities in Geneva are also struggling with the insects. One pest control company had to carry out four "interventions" to deal with bed bugs in 2013 but in 2014, that number has already risen to 1,500.

Amongst other American cities, New York has struggled with a bedbug problem for some years—and the residents of Paris, Nice, Alsace and Marseille have become the insects’ newest victims.

Bedbugs feed on human blood and live in mattresses, and have painful, irritating stings. They breed at remarkable speed, with the female laying around fifteen eggs every day, and can go up to a year without eating.

This, and their resistance to insecticide, goes a certain way to explaining why they are so difficult to get rid of.

Dr Delaunay from Nice, has created a home inspection service to help ‘extreme cases’, while pest services have sprung up around the country. They use superheated steam, vacuum cleaning and freezing practices to eliminate the bugs.

The pest control service also employ sniffer dogs, specially trained to detect their scent, which can check up to fifty hotel rooms per day.