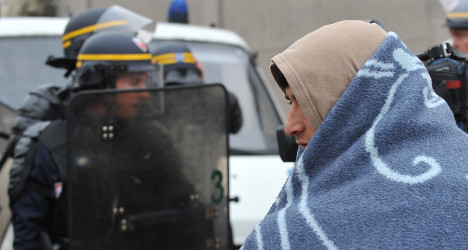 Just days after Calais's mayor called for putting up a temporary shelter for the hundreds of homeless, UK-bound migrants in her city, Interior Minister Bernard Cazeneuve quashed the idea. Instead he favours encouraging migrants to seek asylum in France.

"I don't want to create a shelter that would be a hub for migrants," Cazeneuve told reporters on Thursday. "I don't want to dismantle an illegal immigration network while at the same time putting the conditions in place for the trafficking to continue."

He was responding to the surprise August 22nd call from Calais' Mayor Natacha Bouchard, a immigration hardliner, asking the state to open a shelter for migrants who use the city as a jumping off point for the perilous journey to the United Kingdom.

Bouchard believes the situation for migrants and residents alike has become unbearable, especially after a series of raids on makeshift camps in Calais have done little to disperse the some 1,200 migrants living on there. The migrants live in squalid improvised shelters while waiting for opportunities to sneak into the United Kingdom, which some of them believe has more generous policies for asylum seekers.

Accordingly, Bouchard wanted to put them in a 400-bed government-run facility that would be situated as far away from residential areas as possible.

This idea of opening such a centre in Calais is not new. Between 1999 and 2002, France tried to get a handle on the Calais migrant situation by opening the notorious Sangatte centre, which was managed by the the Red Cross.

Built for 800 people, it quickly had 2,000 migrants living in it before being closed permanently in 2003 under pressure from British authorities and Eurotunnel.

Cazeneuve has warned that a new “Sangatte” would not solve this complex humanitarian problem, and that it would only encourage more migrants to flock to Calais, in the hope of crossing into the UK.

Cazeneuve said he will meet on Friday with British authorities in London and ask them to "accept their responsibilities" and encourage them to send representatives to Calais to discourage migrants from attempting the illegal and perilous crossing.

The minister has also sent representatives to meet with local charities in order to see how the situation, without a shelter, could be improved. He added workers would also trying to convice migrants to apply for asylum in France.

For her part Bouchard wants to meet with Cazeneuve to discuss ways to raise awareness within the European Union. She believes her city and the Italian island of Lampedusa, also the site of an immigration crisis, need more European funds to manage the situation.

In May and again in July police raided improvised camps and squats in Calais, forcing hundreds of migrants out of their makeshift homes. The forced removals have seemingly not stemmed the tide of migrants flowing into the city, as Calais officials have seen staggering in new arrivals this year.

Immigration and Security Minister, James Brokenshire suggested migrants should seek asylum in France or other European countries rather than trying to reach the UK.

"If people have a genuine need of protection they should claim asylum in the first safe country they reach," he said.

"Security at the UK border is our priority and we will continue to strengthen it to stop those who have no right to enter the UK.

"We are taking action at a national and international level to tackle illegal immigration, including bolstered security at Calais with improvements in technology, equipment and intelligence work."