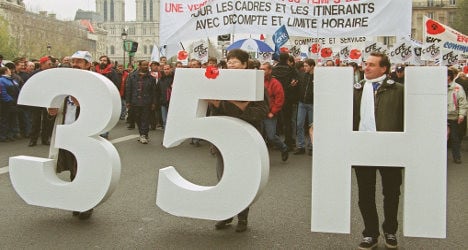 The 36-year-old Macron, a former banker, has been in his post less than two days and has already kicked up a storm with his views on France’s famous 35-hour working week.

In an interview given on the eve of his nomination as minister, Macron made it clear that he favoured a relaxation of the notorious 35-hour law by allowing certain companies to waive the rules.

“We could authorize companies and sectors, in the case where there are majority agreements, to waive the rules around working hours and pay,” he told Le Point magazine.

“This is already possible for companies in trouble, so why not extend it to all companies when there is an agreement with employees,” he added.

For Macron the measure would allow the country to “get out of this trap where the accumulation of rights given to workers ends up with handicaps for those who don’t work.” (Hollande and Macron seen here in his days as the president's advisor. Photo: AFP)

Macron, a former advisor to President François Hollande and close ally of head of state, is seen as responsible for Hollande's shift towards a more liberal economic policy.

He was drafted in to the new government to replace left-wing rebel Arnaud Montebourg and will be charged with pushing through the president's reforms, including a planned shake up of the rigid labour market.

The new minister, accepts however any change of the 35-hour week would be "difficult to explain and to push through, especially when we are on the left".

“They say being a Socialist means extending the formal rights of workers, but the reality invites us to reflect on the rights of all, especially those who do not have jobs,” Macron said.

The minister said France suffers from two “specific and endemic problems”: a loss of competitiveness and its deficit.

While Jospin's supporters marvelled at the humane piece of economic policy that was introduced in 2000, his critics, both in France and beyond its borders, have continued to argue the now sacred 35-hour week acts as a jobs-killer and a brake on the economy.

Numerous exceptions in reality mean the 35-hour week applies to slightly less than half of French workers, and does not include managers.

Recently a new commission was set up to look at the "societal, social, economic and fiscal impact” of the law, although for now at least, there’s been little or no talk of ditching it.

Indeed no sooner had Macron's interview hit the front pages of all websites, the government's secretary of state for European Affairs, Harlem Désir came out and rubbished the idea that any alteration of the cherished reform was on the cards.

"There is no project of this nature,” said Désir. “There is however, a desire to develop social negotiations among businesses” in certain areas, but not to question the “legal duration of the time worked”. The Prime Minister's office at Matignon also decalred they had not plans to look at the 35-hour week.

The president of the CFDT union Laurent Berger simply said: "It's not a good idea. This question is not on the agenda. And it's not a good time to bring it up when you are about to become Economy Minister".

“You realise were still talking about whether Mr Macron is a legitimate choice to be the new Minister, when there are five million French people unemployed and when there are lots of firms in difficulty.

“[The 35-hour week] is not the issue that interests the French people.”

Opposition politicians also leapt on the remarks, with former prime minister Francois Fillon, from the centre-right UMP, saying he would vote "without hesitation" for a change in the 35-hour week.

Pierre Gattaz, president of the MEDEF employers' association, said: "If a business needs (an employee) to work 40 hours, it has to do it."

He said it was necessary to "adapt" and "simplify" France's labour laws, adding that "if we don't start to re-discuss several things, we risk pushing up unemployment even further."

The debate is seen as one of the "third rails" of French politics. The last time it raised its head was in 2012 when then prime minister Jean-Marc Ayrault said that calling the 35-hour law into question should not be a "taboo subject".