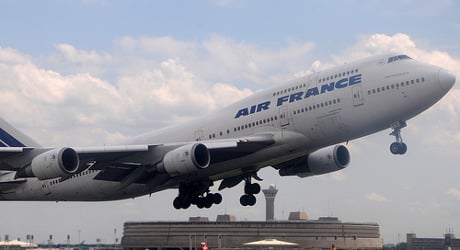 Air France pilots have warned of a major strike in September. Photo: Tab59/Flickr

The union representing most of Air France's pilots has warned it will strike from September 15th to 22nd, but has reserved to extend the labour action if necessary.

The strike warning "between 5am and 11pm" will be filed on Thursday, SNPL pilots' union president Jean-Louis Barber told the French press. He lamented "the absence of a constructive and structured dialogue" with management over the company's new strategic plan.

Pilots are upset over a plan to reorganize the national carrier under a plan called Perform 2020, which is aimed at making the airline more competitive by developing the low-cost brand Transavia and redistribute some of its short and medium haul flights to Air France 's regional affiliate Hop!

Details of the plan are set to be made public in the coming months.

Air France chiefs say the restructuring is needed to reduce the company's debt as well as costs.

The string of rail and airline strikes this year would seem to confirm the stereotype of a strike-happy France. However, a French historian told The Local the French actually are somewhere on the middle of the world's table of most frequent strikers.

SEE ALSO: Why the French are right to go on strike