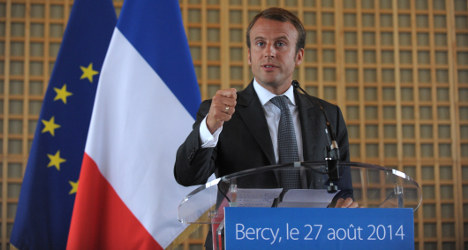 Here are ten things you need to know about the man in charge of France's economy. Photo: Eric Piermont/AFP

The freshly minted Economy Minister Emmanuel Macron is a controversial and key choice for President François Hollande who is battling to fix France and hold his government together.

From Macron's elite education and banking background it's clear why he'd be a candidate, but it's perhaps his loyalty and rapport with the president that got him to the front of the line.

Here are ten things you need to know about the man in charge of France's economy:

Young: He’s 36 years old. But he was even younger when he landed his first serious role in government. Macron was just 34 when he was named Hollande’s economic advisor at the Elysée Palace in 2012. Though he’s got some youthful company in the reshuffled cabinet in the form of newly-named Education Minister Najat Vallaud-Belkacem, the first woman to hold that job, who is also 36.

Elite education: His schooling took him through some of France’s most hallowed institutions. First it was Le Lycée Henri IV in Paris, which can claim as alumni philosopher Michel Foucault and writer Guy de Maupassant. Then it was on to the revered and demanding university, Sciences Po Paris. Then finally the Ecole Nationale d’Administration (ENA), which is the most elite and most challenging school for France’s top public administrators.

Hollande ally: They don’t come much closer to Hollande than Macron. The men are both ENA grads and Socialist stalwarts and their vision to fix France includes stimulating business. But also there seems to be a real personal affinity. When Macron left his advisor job at the Elysée this summer, Hollande spoke at his going away party, joking that “I often introduce myself, when I’m abroad, as the man who works with Emmanuel Macron.” Pro-business and rich: Macron cut his teeth in the world of finance by working from 2008-2012 as a banker for Rothschild. While there he brokered a €9 billion takeover of a Pfizer subsidiary by Nestlé, which made him a millionaire. He then became the man behind Hollande’s 'Responsibility Pact' in January, which is the president’s centrepiece policy aimed at fixing France’s broken economy.

Older woman: Macron’s one apparent scandal in life thus far involves the then 37-year-old married woman he fell in love with when he was just 17. His passion for the woman, who was his French teacher, resulted in the young Macron being bundled off to Paris from his home town of Amiens. But the affair didn’t die and Macron actually married her in 2007 and they remain together to this day.

American connection: He was part of the French-American Foundation’s 2012 class of “Young Leaders”, which is basically a networking and exchange programme for rising stars from both countries. He has just returned from the holidays he spent in California. And he was apparently at Hollande’s side during the president’s visit to Silicon Valley earlier this year.

Montebourg: Macron isn’t all business. He allegedly does a perfect impression of his outspoken predecessor: Arnaud Montebourg. But Macron did still get a congratulatory tweet from Montebourg after he was tapped as economy minister.

Far-left hate: The traditionally left wing of the Socialist party is no fan of Macron’s pro-business stance. There are those among them who blame him for Hollande’s pivot in January away from a tone critical of big business to a conciliatory one seeking the corporate world’s help in fixing France.

Never been elected: He joined the Socialist party when he was 24, but has never sought elected office. That lack of electoral experience is usually a handicap for would-be ministers and in fact kept him out of Prime Minister Manuel Valls' first cabinet. Though for an embattled Hollande, it was something he was willing to overlook.

Nicknames: In his short time, and until now silent role in government he has landed an impressive list of nicknames. His friends call him “Manu”, but he’s also been dubbed “vice president” and, before he held the actual title, he was “co-minister of economy”. He’s also been called, in honour of his alleged genius, “The Mozart of the Elysée Palace”.