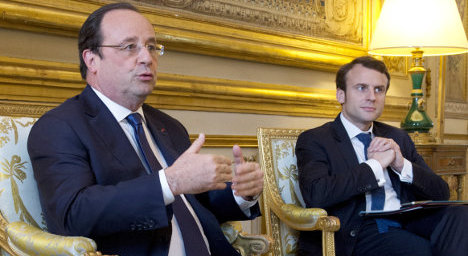 In replacing the left-wing rebel Arnaud Montebourg with former banker Emmanuel Macron, who has been dubbed the “anti-Montebourg” President François Hollande has "liberalised the executive" as one political commentator put it.

In the run up to the presidential election in 2012 Hollande sent shockwaves through the banking world when he declared his “real enemy was the world of finance”.

How things have changed.

Yesterday’s surprise move to bring his former advisor and Rothschild banker into his cabinet as Economy Minister would have raised a few eyebrows and cheers in Paris’s financial district of La Defense as well as in Brussels and Berlin.

As Le Monde newspaper points out, Macron’s appointment was significant because of what it symbolizes and the message it sends to those on the left of his party.

“The signal is clear,” read an editorial in Le Parisien newspaper. “Hollande and Valls have exited from any ambiguity… The turn from social democrat to social liberal is complete from yesterday.”

With his appointment and with loyalist Michel Sapin as finance minister, Hollande has set a clear course for the rest of his presidency.

Macron, Sapin and the new government, which is packed full of Hollande allies will now be tasked with pushing through the austerity policies that Montebourg claimed had ruined France and Europe. The key reform is the “Responsibility Pact” – the president's flagship bill designed to spark the economy and cut record unemployment.

Macron was one of the authors of the legislation and significantly, according to the sources interviewed by Le Parisien, “he has the ears of Brussels” and many contacts in the world of business.

“In uniting his last faithful, Hollande has also played the only card he has left before he ends up in a political impasse,” Le Parisien says.

The problem Hollande faces is that despite the fact his new government may be more in tune with the direction he and Valls want to go, and less likely to speak out publicly, it is almost certainly weaker than ever.

By refusing to bring in any figures from the left of the party that would ensure some balance and with the Greens apparently declining to join the government, its support base in the Assembly and among the public is weak.

The left wing of the party that already counts some 40 “frondeurs” or rebels, who have abstained on certain votes, are unlikely to be pleased by the appointment of a young man from the world of finance.

When asked about Macron’s appointment Valls said: “So what? Can’t anyone in this country be an entrepreneur? Can’t anyone be a banker?”

With left wingers like Montebourg gone, everything hinges on the support for Valls and Hollande himself, whose popularity in the polls continues to dwindle.

Valls has said he will hold a vote of confidence in the Assembly in “September or October” and he acknowledged that the government would be finished if they did not get the backing of the National Assembly.

"I will have the opportunity to hold a vote of confidence in the (lower house) National Assembly on a work programme… in September or in October," Manuel Valls said in a television interview.

"And you will see, the majority will be there. There can be no other way. If the majority isn't there on that occasion, it would be finished. We couldn't finish our work," he added.

The likelihood of a dissolution remains slim but all will depend on whether Hollande and his government can make headway on the new course he has set himself.

Or whether his adversaries on the left of the party choose to throw him off track by denying him a majority in parliament.