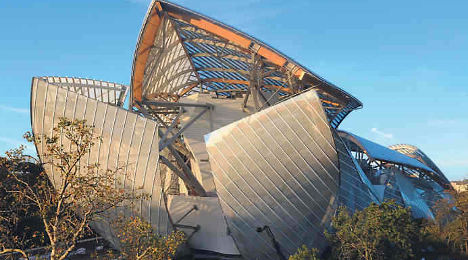 What is it? A spaceship? No it's an art-gallery. Photo: Louis Vuitton Foundation

If you are feeling nostalgic about the end of summer and dreading the coming of the autumn, worry no more. There will be plenty to do in Paris, as the French capital will soon be home to some new attractions. Here's a look at four long-term projects that are set  to open or be completed.

The Louis Vuitton Foundation for Creation

In the 16th arrondissement of Paris, in the Jardin d’Acclimatation, a futuristic building has sprung up from the ground, although it looks more like a spaceship has landed in the park. Created by the Louis Vuitton Foundation, it will become one of the biggest contemporary art museums in the capital, covering an overall space of 11, 700 square metres.

More than 700 workers have been hired to complete the herculean task of building the mammoth cloud of glass and steel, designed by architect Frank Gehry, who is famous for his design of the Guggenheim Museum, in Bilbao.

The Louis Vuitton Foundation for Creation will hold up to 11 art galleries, and a conference room. It will be inaugurated on October 20th.

Closed for renovation in 2011, the popular Picasso Museum, dedicated to the life and works of the famous Spanish painter, will finally reopen on October 25th, a date which just so happens to be his birthday.

The renovation of the museum has been dogged by problems and the reopening has been pushed back several times.

However, admirers of the artist will be able to get a sneak glimpse of the museum before the opening on September 20th and 21st, for the “Journées Du Patrimoine” or Heritage Days when France opens some of its famous historic buildings to the public.

More than 5,000 pieces of arts will be exhibited in this museum, located in the Marais district of Paris.

The project of renovating the Les Halles area of central Paris has been ongoing for a while now and it aims to create a welcoming urban environment by 2018.

The idea is to build 3,870 square meters of playgrounds for children, with lawns and benches. But before that, a draping canopy, costing €1 million, to shelter the shopping center, will be inaugurated later this year.

First floor of the Eiffel Tower

The completion of the new-look first floor of the Eiffel Tower was due for mid-2014, but due to some delays, visitors will only be able to make the most of it this coming autumn. But the delay could be worth it, as long as you don't suffer from vertigo.

A transparent glass floor has been built on the first level, 57 meters up from the ground. Visitors will be able to walk on it and admire the view looking down to the queues of visitors directly below. This won't be for the faint-hearted.