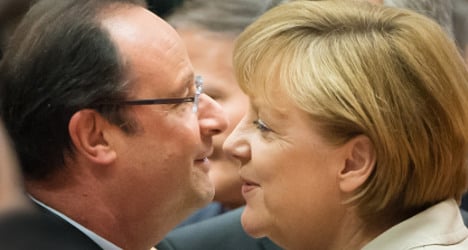 That's close enough. Merkel needs to meet Hollande half way to help him Photo: AFP
The French economy is weak, the state lacks money and the government has been changed for the second time in five months. But this is not all the fault of the Socialist president Hollande. Berlin and Brussels now have to stand by him – it is in their interest.
Whatever François Hollande touches seems to fail. The economy? It’s stagnant. Unemployment? It’s on the up. His government? It’s just been changed – for the second time this year. The confidence of the public? What confidence?
As Hollande approaches the middle of his term he stands empty-handed. Many French people complain about him. The radical right and the radical left gather in the disillusioned and stir up opposition against Germany.
EU partners are worried about France. Hollande has become a symbol of the weak politician, glued to failure like tar on his shoes.
The disappointment is justified, because the president has of course made mistakes. He hoped for too long, that a boost in the economy would spare him from the job of reform.
And it was wrong to include all the wings of the Socialist Party in his government, from the far left to the previous economic minister Arnaud Montebourg, who is unimpressed by savings cuts, labour market reforms and tax relief for companies.
However, it is unfair to put all the blame on Hollande. France has failed for decades to prepare the state and its administration, tax and social security systems to globalisation.
His conservative predecessor Chirac and Sarkozy contributed too little. Ironically it’s the Socialist Hollande who will now begin the task of making unpopular cuts in the French model.
He is trying to save and to strengthen businesses and relax the rules of the labour market. But it’s hard. Look at Italy where the energetic Prime Minister Matteo Renzi – a kind of anti-Hollande – has had similar problems.
It’s extremely difficult to rehabilitate in a time of weak economy and when more of Europe’s citizens are falling victim to Europe’s tight budgets.
The millions of people especially in the south of the EU, who cannot find work and have become impoverished, naturally question German economic and fiscal policy in the EU.
Equally of course the governments of northern European countries are fearful of unbridled spending on problem states. Both views must be taken into account if the EU wants to succeed, both among the public and the financial markets.
France is the key state. It must not degenerate and fall in to the hands of the radicals. Therefore the priority has to be Save Private Hollande.  If the president and his new government are to continue the reforms steadily, then Berlin and Brussels must meet him halfway – through EU investment programmes, a united fight against unemployment, and especially more flexibility over the deficit limit of three percent.
Because no one is helped, if in restructuring the French economy, the President and the moderate forces in the country, go bankrupt.