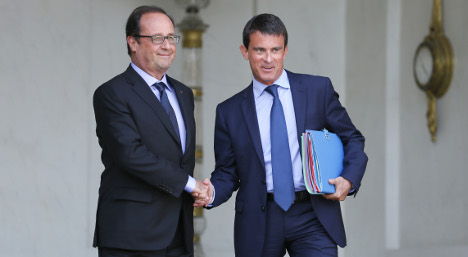 Presidnet François Hollande and PM Manuel Valls have a lot of work to do. Photo: Patrick Kovarik/AFP

By naming a new government just a day after dissolving the previous one French president François Hollande and PM Manuel Valls have not wasted any time.

They know time is running out. Hollande is edging nearer the half-way point in his presidency and he and his third government still have so much to do.

Here’s a look at the main jobs on their agenda.

The only thing that can save Hollande’s presidency is if he reverses the trend of rising unemployment. To do that his government must accelerate the implementation of the “Responsibility pact”, which is aimed at cutting around €40 billion in payroll taxes in the hope it will encourage employers to recruit.

The new government will have to deal with those on the left of the party who are against the pact, because they see it as too pro-business. Discussions will also take place in September around “removing obstacles” to apprenticeships. Hollande wants to see half a million youngsters in apprenticeships by 2017.

Talk to Brussels and Berlin

After recent economic figures showing France’s economy was stagnant, the government was forced to admit it won’t meet its strict deficit targets set by Brussels. The goal to reduce it to three percent of GDP has been postponed, almost indefinitely. The government will have to negotiate with Europe a new set of targets it hopes will be more realistic given the fact there is zero growth.

Earlier this year PM Valls said his “obsession” is “movement and reform” and to free France from blockages. One thing he had in mind is the country’s rigid labour market. Valls has even suggested the country’s 3,000 page labour code could be simplified.  "Do we move or do we not move? Do we reform or do we not reform?", Valls has said. Hollande has also made it clear he wants the labour market rules simplified.

Whether any reform can take place is another question. Negotiations are due to take place between unions and bosses and as ever they will be fraught.

"We have to get around the table to find solutions,” Hollande said in July. “We are at a moment where the future of France is in play.”

Earlier this month Hollande announced a raft of measures aimed at easing the burden for the country’s most hard-up by boosting their spending power. He said the government would "simplify and make fairer the income tax levels for the … low-income taxpayers."

He also said Economy Minister Arnaud Montebourg would soon present "draft legislation on purchasing power which aims to boost competition for services offered to consumers." Obviously it won’t be Montebourg, whose rebellion prompted this week's cabinet reshuffle, but the legislation remains on the to-do list.

Hollande has promised a new stimulus plan to boost housing.

Measures are also expected to encourage investment in housing rentals. PM Valls is keen on destroying the previous laws set in place by former Housing Minister Cecile Duflot, although he will face opposition from the Greens on that issue.

When this controversial tax on heavy goods vehicles was about to be introduced last year, it provoked riots and violent protests across Brittany and had experts predicting France was on the brink of “social explosion”. The government ditched it under pressure, but the issue will soon resurface.

The tax is set to be replaced by a “transit toll”on trucks over 3.5 tonnes on 4,000 km of roads. The government and firms are currently mediating over the planned law. Cutting the number of regions in France has proved an impossible reform over the years but Hollande is attempting to push it through and a first draft of the law has already passed the National Assembly.

The Senate however could reject the proposal to cut France’s regions from 22 to 13, especially if there is a right-wing majority which there could be after a number of Senate seats are “renewed” at the end of September.

Major health reforms are expected to be put before the cabinet in September with a view to being examined in parliament in 2015.

It will look at the system of payments as well as health prevention and may include a ban on electronic cigarettes in public places.

Two bills, one on asylum and one on immigration, will be debated in parliament in the coming months. Hollande can expect attacks from the right on these explosive issues, but also from within his own camp.