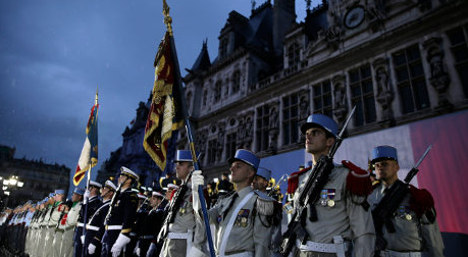 French soldiers mark the 70th anniversary of the Liberation of Paris at the Town Hall in the French capital on Monday night. Photo: AFP

It was seven decades ago on Monday that the Germans were finally forced out of the City of Light after years of harsh and humiliating rule.

The end came suddenly when the Germans surrendered amid a motley rebellion of police, resistance fighters, ordinary citizens and finally allied forces. It was cause for a spontaneous street party on August 25th 1944.

Here are some photo highlights of the commemoration at Paris Town Hall on Monday:

The words "Parisian railway workers! Your duty as French patriot .." are seen on the facade of the Paris' town hall during a light show (Joel Saget/AFP)

French veterans take part in celebrations marking the 70th anniversary of the liberation of Paris from Nazi occupation. (Joel Saget/AFP)

French President François Hollande gives a speech as part of celebrations marking the 70th anniversary of the liberation of Paris. (Fred Dufour/AFP)

French troops stand to attention during celebrations marking the 70th anniversary of the liberation of Paris. (Joel Saget/AFP)