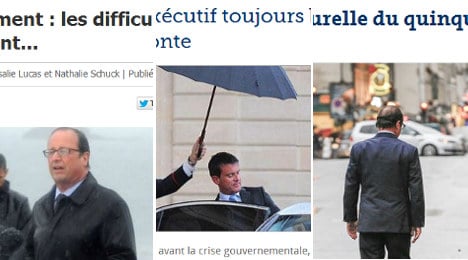 "What a spectacle!" screamed the front page of Le Parisien daily, encapsulating the sense of crisis engulfing the French government after Monday's shock resignation of the government and impending reshuffle.

Several French dailies carried an image of French President François Hollande looking bedraggled and drenched under a torrential downpour as he delivered a speech to mark the 70th anniversary of the liberation of Paris.

Dailies Le Figaro (right) and Liberation (left) – on opposite ends of the political spectrum – found a rare harmony in their front pages: "Regime crisis."

Le Figaro said the consequences of this political crisis were "incalculable" while Liberation said that Hollande was "more and more isolated".

Leading daily Le Monde said: "The political return from holiday was already looking difficult for the president and the prime minister. In a few hours, it became explosive."

It described the cabinet reshuffle, expected to be unveiled later on Tuesday, as "the last chance for the president to save his five-year term" as Hollande faces record-low unpopularity at 17 percent and record-high unemployment.

In a move that caught France completely by surprise on Monday, Prime Minister Manuel Valls tendered his government's resignation to the president, who immediately tasked him with forming a new one.

The move came after tensions with the left flank of his ruling Socialist Party over austerity measures burst into the open, as the economy minister openly criticized the government's economic direction. But the minister, Arnaud Montebourg, and Education Minister Benoit Hamon, who resigned in solidarity, found some support from left-wing daily L'Humanité.

"François Hollande and Manuel Valls quickly and brutally punished Arnaud Montebourg and Benoit Hamon, who finally said aloud what the majority of left-wing voters think: austerity is leading the country to the wall," the paper said in an editorial.

"Save France from the radicals"

The sacking of the government also made headlines outside France. In Germany, the eurozone's leading economy where concern about the state of the French economy is deep rooted, the Süddeutsche Zeitung headline read "Save France from the radicals".

It was a plea to Germany's own leaders to perhaps to do more to help boost the eurozone's economy which would help keep France's anti-EU radicals on both the far-left and the far-right in check.

Also in Germany the tabloid Bild headlined with "Government chaos in KRANKreich" – Krankreich being a play on words with using "Frankreich", the German word for France and "Krank" which means sick.

Spiegel Online went with "Hollande at the End" and speculated whether Marine Le Pen could be the next president of France.

In Italy the press focused on how the issue of austerity, which the country knows only too well, had split the French government.

"Anti-austerity line splits the French government" read the headline in left-wing daily broadsheet La Repubblica and Corriere della Sera said the Italian left could learn from what happened in France and not make the same mistake as Montebourg.

In the UK where the press tend to delight in France's misery the Financial Times suggested Monday's dramatic events had been coming for a long time.

"After decades of stalling, a day of reckoning for France", read the headline. For its part the right wing Daily Telegraph, published an opinion piece under the title "Europe needs France to find a leader who can enact structural reform".

In the United States the Bloomberg website also stressed how the National Front's Marine Le Pen stands to gain from the "fake crisis" in an opinion piece headlined "France's fake crisis boosts the far right".