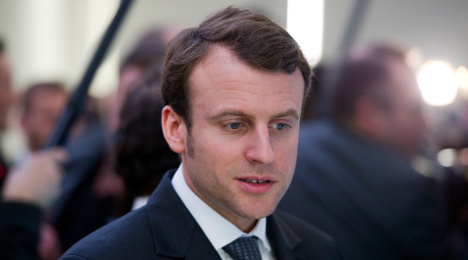 French President Francois Hollande on Tuesday named 36-year-old Emmanuel Macron, a former banker and a close ally, the new economy minister in an emergency reshuffle after a major political crisis.

Interestingly Macron was behind the president's flagship economic policy the "Responsibility Pact", which calls for lower payroll taxes on businesses in the hope of boosting recruitment, which Montebourg was so opposed to.

The graduate from elite political school ENA is back at the Elysée after leaving his economic advisor job there only in July. He pushed the Socialist president towards implementing a more liberal financial policy as the country struggles with stagnant growth and record unemployment.

Macron is very different from his predecessor Montebourg, who is on the left of the Socialist party and advocates cutting taxes and upping government spending.

He will be joined at the Ministry of Finance, known as Bercy, by Michel Sapin, another Hollande ally, who backs austerity measures. Sapin holds on to his position as Finance Minister.

Najat Vallaud-Belkacem, the former minister of women's rights, was named as the education minister replacing Benoit Hamon, who along with Montebourg had spoken out against Hollande's and Valls's policies.

Several names had ruled themselves of being in the government throughout the day including former Director General of the World Trade Organisation Pascal Lamy and late on Tuesday transport secretary Frederic Cuvillier also ruled himself out of joining the new government.

With France now dealing with a political as well as a financial crisis Hollande let it be known on Tuesday the new leadership will be a government of “clarity”.

The presidential palace announced that Hollande wants his government to be “clear” on “its direction, its behaviour and its composition".

“It is imperative the behaviour [of ministers] guarantees coherence, respect and solidarity,” the palace said.

As unpopular Hollande battles to overcome splits in his ruling Socialists and revive the stagnant French economy, Manuel Valls was expected to announce the make-up of his new team on Tuesday afternoon.

The surprise resignation on Monday was seen as a bid to restore order after a weekend of sniping from Montebourg, who attacked France's economic direction and the country's main European ally Germany.

Montebourg, a left-wing firebrand who is no stranger to controversy, made it clear he would not be part of the new team and launched a hefty broadside at the policies of austerity he said had catapulted France and Europe into the worst economic crisis since the 1929 Depression.

Education Minister Benoît Hamon and Culture Minister Aurélie Filippetti later said they would join him in self-imposed exile from the next government.

Top French daily Le Monde described the reshuffle as "the last chance for the president to save his five-year term" as Hollande faces record-low unpopularity at 17 percent and record-high unemployment.

Their first cabinet meeting will be on Wednesday at 10am.