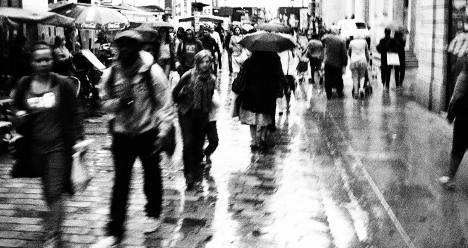 The French public were left even more disillusioned with the political leaders after Monday's shock resignation of the government. Photo: AFP

President François Hollande and his Socialist Party were embroiled in yet another political crisis on Monday.

Hollande’s popularity is already at an all-time low, but with the appointment of Valls as Prime Minister of France, in April, he had hoped to win back some of his electors, and to re-assert his authority.

But things have clearly not gone as he had hoped. On Sunday, the soon-to-be-sacked Economy Minister Arnaud Montebourg and Education Minister Benoît Hamon questioned Hollande and Valls economic policy of trying to trim state deficits by imposing €50 billion worth of cuts.

The rebel ministers demanded a change of tack towards growth and more tax cuts for residents.

But for Prime Minister Valls "a line had been crossed", leaving him no choice but to reshuffle the government and oust the rogue ministers.

Karine Bellier, 41, an HR consultant, agreed that Hollande and Valls had to take action.

“Changing the government is the only good option if Hollande wants to keep a hold on it. Arnaud Montebourg is the economy minister, and criticizing the economic policies of the government was out of line. By reshuffling, Hollande shows for the first time some signs of authority and of leadership," she said.

LIVE: Hollande's presidency is in 'disarray' Gustave Kenedi, a political economy student added: "After this, Hollande hopes to have a united government. The way I see it is that he is sending a clear message to everyone in his party: he will not deviate from the reforms he has announced”.

Kenedi added that the real question now was whether the president of France would have a majority in parliament to support his new government, and to back up these reforms: “If not, we risk a dissolution of the National Assembly, which would be catastrophic, both for him and for the socialist party”.

Many of the people The Local spoke to saw Hollande as a weak president, who was incapable of bringing about change.

“France is already impossible to reform, whatever the government. But it’s worse with Hollande,"  said Michel Torralba, a 35-year-old computer engineer.

"Just take a look at the economy!  We don’t seem to be going in the right direction. We've already changed the prime minister once, and nothing has changed. I’m not expecting more from a new government," he said.

That was a view shared by Jean Talbot, a 47-year-old transport agent who believes that “during such a complex economic crisis, the government has no power to do anything. Reshuffling will not bring any new solutions.

"We are in the middle of a crisis, and no politician can really change that, whether on the left or on the right of the political spectrum".

Faced with high levels of unemployment and a stagnant economy, French people are worried and fed up, and they feel the government does not realize how bad it is.

Alice Blois, a 25-year-old office worker, told The Local “the government spends more time bickering than implementing policies to get people back to work. Changing the government once more only highlights its lack of unity, which we are all suffering from”.

Standing out from all pessimism surrounding France, was retired soldier and journalist Gérard Willaume, who told The Local that whether the government changed or not, between today and tomorrow, he would still support it.

“I believe we are on the right track, but what people don’t get is that it takes time, most of the reforms will only have effect on the long run. The global context is bad, it’s not all Hollande’s fault. For my part I will only judge him in 2017, when we will be able to see whether his reforms have had any results," said Willaume.