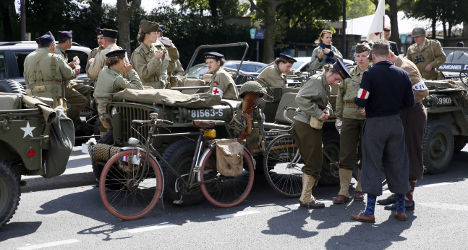 Paris is partying on Monday to mark its liberation during World War II. Photo: Patrick Kovarik/AFP

French President François Hollande will Monday lead celebrations to mark the 70th anniversary of the joyful liberation of Paris after four long and bitter years of Nazi occupation in World War II.

Parisians will mark the event just as their parents and grandparents did seven decades ago — with a mass dance at City Hall.

There will also be an altogether more modern twist to the ball later Monday, however, with a sound and light show and huge projections of previously unseen photos on the facade of the imposing building in central Paris.

The liberation of Paris, which came two months after the D-Day landings began to free Europe from Nazism, started in classic French fashion: with a general strike.

The uprising began on August 19 when up to 3,000 police officers retook their old headquarters and hoisted the French flag, starting a domino effect that would see a succession of public buildings fall into the hands of the French Resistance.

The Nazi military governor of Paris, General Dietrich von Choltitz, negotiated a shaky truce with the Resistance that failed to hold, but famously disobeyed Hitler's orders to destroy the capital's monuments and bridges.

On August 25, as Allied troops flooded into the city, von Choltitz signed his capitulation at Gare Montparnasse. The losses were minimal for an operation of its size. The French second
armoured division lost 156 men, the American fourth division none at all.

As spontaneous displays of joy erupted throughout the city with Parisians rushing out to hold impromptu street parties with their liberators, French war-time chief Charles De Gaulle gave a famous speech at City Hall.

The next day, he would march down the Champs Elysees cheered on by a million people.

Hollande was expected to give a speech at around 12:00pm on the Ile de Sein, off the northwest coast of France, in recognition of its contribution to the Resistance movement.

The vast majority of the tiny island's population refused to accept their country's occupation and fled to Britain to join the fight for France's liberation.

The celebrations cap a series of events marking the historic battles of 70 years ago, honouring veterans that, many now in their 90s, are unlikely to see many more anniversaries.

World leaders gathered in Normandy in June to mark the 70th anniversary of D-Day and earlier this month, African heads of state gathered in southeastern France to celebrate the southern landings in France that pushed the Nazis back towards Germany.