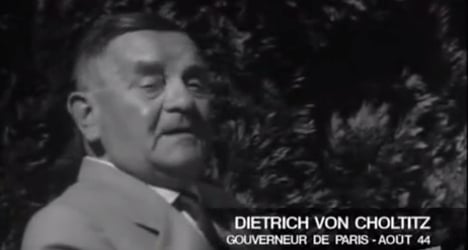 At the close of World War II European capitals like London and Berlin were smoking piles of rubble after years of war, but incredibly the historical treasures of Paris were nearly untouched.

The city was largely spared due to its early surrender and the lesser strategic importance it was accorded by Allied commanders, but General Dietrich von Choltitz, the Nazi general in charge of Paris when it was retaken, also fostered his own explanation.

The general took command in Paris on Aug 8, 1944 and at a meeting in Germany the day before, Hitler told him to be prepared to destroy all religious and historic monuments.

Hitler is then believed to have given the order by cable, telling Choltitz to turn the capital into a "pile of rubble".

On the eve of the capital's liberation, Hitler, so the story goes, was still demanding to know: "Is Paris burning?"

In his 1951 memoir, “Is Paris Burning” Choltitz  took credit for sparing the City of Light from Adolf Hitler by disobeying the Führer’s orders to reduce it to cinders as the war entered its final phase.

“If for this first time I disobeyed (an order), it was because I knew Hitler was crazy,” Choltitz reportedly said.

After failing to flatten the city Choltitz surrendered on August 25th 1944 as an uprising led by the French resistance raged in the capital.

Choltitz’s version of history has since been repeated by his son.

"If he saved only Notre Dame, that would be enough reason for the French to be grateful," the general's son, Timo told The Telegraph in 2004. "But he could have done a lot more.

"France officially refuses to this day to accept it and insists that the Resistance liberated Paris with 2,000 guns against the German army. To official France, my father was a swine, but every educated French person knows what he did for them. I am very proud of his memory."

For many who know the story of the uprising well, this account is absolute self-serving fantasy.

“He portrays himself as the saviour of the city,” Lionel Dardenne, from the Museum of Order of the Liberation, which honours resistance fighters, told The Local. “But the truth is he couldn’t have destroyed it.” The allies were closing in on the capital and Choltitz had neither the men, material nor air support to level the city, assistant curator Dardenne says. Also, Choltitz was a high-level, career soldier who had taken part in the leveling of cities like Rotterdam and Sevastopol, and was not sentimental about destruction.

Secret recordings made of Choltitz and other German commanders while they were in allied custody after the war, later revealed he was at least aware of the mass execution of Jews in zones under his control and may have aided in the killing effort.

Von Choltitz was never charged with any war crimes however.

“He’s created a legend for himself. People make a place for themselves in history either by saving or destroying,” Dardenne said, who says at most the general spared a few bridges. “He decided his myth would be that he saved the city.”

The myth of Choltitz was coined in his memoir, but has taken root in French popular culture to the point that Parisians have called for the erection of a plaque in his honour as has been done for other war heroes.

A book in the 1960s repeated the Nazi general’s version of history before being made into the 1965 movie “Is Paris Burning”, whose cast included Orson Welles as heroic Swedish Consul Raoul Nordling, which only served to further sear the story into the popular consciousness.

The Choltitz legend continues to grow even today. A 2014 Franco-German film called “Diplomacy” recounts a story in which Choltitz negotiates with Nordling, a go-between for the Resistance, to spare the capital from Hitler's madman orders.

“It’s totally false. The story was entirely made up,” Dardenne said. “Yes, Nordling discussed saving some prisoners lives with Choltitz, but that’s it.”