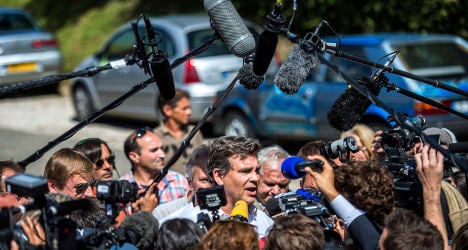 He once attacked German Chancellor Angela Merkel for "Bismarck-style" policies and dubbed a leading US industrialist an "extremist": French Economy Minister Arnaud Montebourg is no stranger to scandal.

The crisis-hit French government collapsed on Monday after the telegenic and tousled Montebourg launched an assault on France's ally Germany, saying it was "trapped in an austerity policy it imposed across Europe."

The 51-year-old then said he wanted a "major shift" in France's economic policy, in comments seen as an unacceptable challenge to President Francois Hollande and Prime Minister Manuel Valls.

Firmly positioned on the far-left wing of France's ruling Socialists, Montebourg has for many years been a target of the centre-right, which sees him as the caricature of the anti-capitalist, anti-business French politician.

Reacting to the government collapse, the vice-president of the MEDEF business association said Montebourg was "in the wrong era" and wanted to return to "1990s policies" by rolling back austerity and building up France's budget deficit.

But the latest spat is far from Montebourg's first brush with controversy — indeed only the latest in a series of loose-cannon remarks aimed at France's neighbours and the European Union.

Top centre-right politician Francois Fillon has said that he "speaks with such arrogance, giving lessons to the entire world."

In 2011, before he was a minister, Montebourg called for "political confrontation" with Germany, which was pushing what he called Merkel's "Bismarck-style" austerity policies in Europe in the middle of the euro crisis.

He was appointed minister for industrial renewal in May 2012 but his government office did not mitigate his outspoken style.

He attacked European Commission President Jose Manuel Barroso, saying he was "the fuel of the National Front," referring to the far-right party that is rising up the polls in France.

"I think the main cause of the rise of the National Front is related to the way in which the EU today exerts considerable pressure on democratically elected governments," he said, adding Barroso's Europe was "paralysed."

He also became embroiled in an unseemly spat with the head of US tyremaker Titan, who declined Montebourg's invitation to invest in a loss-making tyre plant in France by saying the French workforce there "gets paid high wages but only works three hours."

Montebourg retorted: "Your extremist insults display a perfect ignorance of what our country is about", adding that he would "inspect your tyre imports with a redoubled zeal."

He also clashed with Indian-born steel tycoon Lakshmi Mittal, saying his firm ArcelorMittal, the world's top steelmaker, was blackmailing France and was "no longer welcome in France," causing outrage in business circles.

Prime Minister Valls, who caught France's political commentators off-balance Monday with the government's shock resignation, has also found himself on the receiving end of Montebourg's rhetoric.

Last year when still interior minister, Valls said any Roma in France not working should be "delivered back to the borders", triggering a sharp reaction from Montebourg, who pointedly alluded to Valls' own status as the son of Spanish immigrants who left for France during Franco's dictatorship.