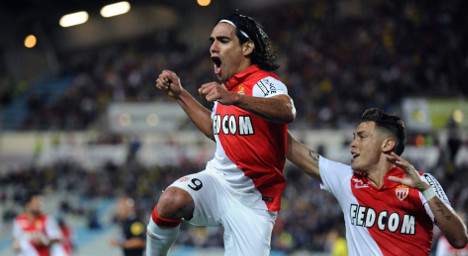 Promoted Lens recorded their first goal and points of the Ligue 1 season with a 1-0 win at Lyon while Radamel Falcao lifted Monaco's spirits in Ligue 1 action on Sunday.

The Colombia striker, who missed the World Cup when out injured for six months, got last season's runners-up finally off the mark at the third attempt against Nantes.

Winless after their opening two outings Monaco went into the game at the foot of the nascent table but climbed up to fourth from bottom when Falcao headed home Layvin Kurzawa's cross for the only goal in the 17th minute to the relief of among others Monaco's new boss Leonardo Jardim.

Falcao started at the expense of Bulgarian striker Dimitar Berbatov.

While that result at Nantes raised spirits at the principality club, Lyon's miserable week had earlier ended on a sour note.

Lyon boss Hubert Fournier had hoped for a response from his side after Thursday's shock 2-1 home defeat to Romanians Astra Giurgiu in the first leg of the Europa League play-offs, but instead they floundered once more.

Madagascar international Lalaina Nomenjanahary netted an 11th-minute goal for Lens and, despite wasting several chances to increase their lead, it proved enough to secure a first victory of the campaign after successive defeats.

Fournier's injury-riddled side suffered another blow in midweek with France midfielder Clement Grenier added to the mounting list of casualties after being sidelined for six to eight weeks following surgery to fix a lingering
groin problem.

Guinean striker Mohamed Yattara, restored to the Lyon line-up after last weekend's defeat at Toulouse, saw an early chance saved by Lens goalkeeper Rudy Riou but it was Lens who made the early breakthrough at the Stade de Gerland.

Yoann Touzghar broke in behind the Lyon defence and squared for Nomenjanahary as Bakary Kone completely missed an attempted clearance, allowing the Malagasy midfielder to steer into an empty net for his first top-flight goal.

Touzghar spurned a golden opportunity to double Lens' lead just before the hour with Lyon 'keeper Anthony Lopes making an excellent low stop to deny him after a barnstorming run from team-mate Adamo Coulibary.

Wylan Cyprien struck the crossbar with a free-kick shortly afterwards as Lens continued to apply the pressure with Touzghar then stabbing over from point-blank range as the visitors struggled to kill off the contest.

Lyon pressed for an equaliser with last season's top scorer Alexandre Lacazette volleying just wide while Steed Malbranque hit the base of the post, but Lens held on to get their campaign finally up and running.

Lens manager Antoine Kombouare said: "Our season has really begun now because we were waiting impatiently to get some points on the board.

"We appreciate this victory with a lot of pride and joy."

Elsewhere, Saint-Etienne lost their unbeaten record when held to a goalless home draw by Rennes.

On Friday, Paris Saint-Germain laboured to a 0-0 draw with Evian in Annecy as Laurent Blanc's side finished the match with 10 men following the second-half dismissal of Yohan Cabaye.

Bordeaux, though, are the early pacesetters with a maximum nine points as Willy Sagnol's men came from behind to beat Nice 3-1 at the Allianz Riviera on Saturday.

Andre-Pierre Gignac ended Marseille's wait for a first victory under new coach Marcelo Bielsa as he scored the decisive goal in a 1-0 win at Guingamp in Ligue 1 on Saturday.