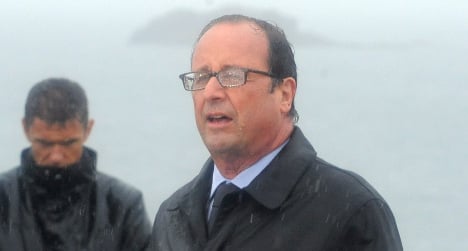 When it rains it pours. Things go from bad to worse for beleagured French President François Hollande. Photo: Fred Tanneau/AFP
It is the second reshuffle in just five months as the Socialists struggle to pull stagnating France out of the economic doldrums and the party is riven by infighting between left-leaning members and those who veer more to the centre.
A presidency statement said Prime Minister Manuel Valls had tendered the resignation of his government and the new line-up would be announced on Tuesday.
"The head of state asked him (Valls) to form a team consistent with the direction he has himself set for the country," it said.
The move caught France by surprise and sparked concern that Hollande, whose popularity is at a record low at just 17 percent, will lose further support by alienating key members of his party that still wield influence.
"It's a very serious crisis. We've never had this kind of rebellion in the government before now," French politics professor Philippe Marliere told The Local. "It's clear there is a rupture in the party."
Economy Minister Arnaud Montebourg, whose comments over the weekend slamming the country's economic direction and France's ally Germany sparked the crisis, said he would not be in the new cabinet as did his ally Culture Minister Aurelie Filippetti.
Montebourg also announced that Education Minister Benoit Hamon, another member of the left-leaning clan of the party, would not take part in the new line-up.

'Take back my freedom'

Echoing his weekend comments in stronger terms, the anti-globalisation advocate warned in a speech Monday that austerity measures were only prolonging and worsening a "serious, destructive and long" crisis in Europe.

"For two years, I fought tirelessly to convince, I wrote notes and letters to the head of the executive and made private and public declarations to attempt to convince and implore the president to refuse excessive measures for our country that risked damaging and sinking our economy," he said.

Acknowledging that he had failed to convince the president or prime minister, he said: "I believed it necessary to take back my freedom in the same way he (Valls) accepted to give it to me."

The 51-year-old left-wing minister is no stranger to controversy, having made headlines in the past for his outspoken criticism of Germany, which he has blamed for factory closures in France.

He was promoted to his current position in April in a government shake-up after the Socialist party suffered a drubbing at local elections, and has had to cosy up to Finance Minister Michel Sapin who supports the very austerity measures that he disagrees with.

As industrial renewal minister before his promotion, he had grabbed headlines by labelling the head of tyre giant Titan an "extremist" after the CEO criticised the French workforce as lazy.

He also became embroiled in a very public fight with steelmaker ArcelorMittal over the closure of a plant.

Socialist Party senator Richard Yung told The Local on Monday that Montebourg had "gone too far" this time.

"He crossed a line. You can say certain things but you can't give the impression you are outside the government, especially when you are the minister for the economy. People will look at this and think its balmy. And we don't understand it either."

Yung said the open criticism from ministers had caused "pandemonium" in the goverment.

Opposition figures reacted with shock to the unfolding events, pointing to a major crisis of confidence at the heart of the executive, with far-right leader Marine Le Pen even calling for the lower house National Assembly to be dissolved.

And former Prime Minister François Fillon said the dissolution of the government showed that Hollande's presidency was in "disarray".

The crisis comes at a time when France is mired in stubbornly slow economic recovery, with high unemployment.

The central bank warned this month that Hollande had no hope of reaching his target of 1.0 percent growth for 2014.

The French economy has been stagnant for the past six months and the government was forced to halve its growth forecast to 0.5 percent for this year.

'Historically unpopular'
Both Hollande and Valls say the answer is their so-called Responsibility Pact that offers businesses tax breaks of some €40 billion ($55 billion) in exchange for a pledge by companies to create 500,000 jobs over three years.
Hollande plans to finance this with 50 billion euros in spending cuts, and the plan has angered those on the left of the party — including Montebourg
The prime minister himself, who veers more towards the centre, is also deeply unpopular with some Socialists.
Two Green ministers left the government when Valls was appointed in March after the Socialists' election humiliation.
But Frederic Dabi, deputy head of polling firm IFOP, said the impact of the crisis on public opinion should not be overestimated.
"We have a government and president that are historically unpopular, and what will make them popular or more unpopular isn't what happens in the government in terms of people but policies being implemented and a lack of results."