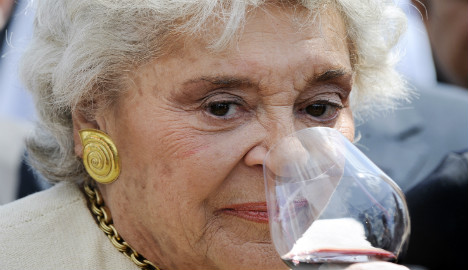 Philippine de Rothschild, the grande dame of Bordeaux wine and part-owner of the legendary Chateau Mouton Rothschild vineyard, has died aged 80, her estate said on Saturday.

Baronness de Rothschild was president of the supervisory board and the controlling shareholder in the family-owned Baron Philippe de Rothschild house, which produces the Mouton Cadet claret — a standard bearer in the world of Bordeaux wine.

She also owned, along with her three children, the wine houses of Chateau d'Armailhac and Chateau Clerc Milon.

The only daughter of grand prix racing driver and banking heir Phillipe de Rothschild, she enjoyed a 30-year acting career under the stage name Philippine Pascal before taking over the family estate after her father's death in 1988.

As president, Rothschild helped modernise and diversify the estate's wine production, developing partnerships with vineyards in California and Chile.

Rothschild was also responsible for choosing the artists who illustrated the labels of Chateau Mouton Rothschild wines — which can sell for tens of thousands of euros a bottle — working with famous painters such as Pablo Picasso and Francis Bacon.

Her mother, Elisabeth Pelletier de Chambure, was arrested by the Gestapo when Rothschild was 10 years old and later died at the Ravensbruck Nazi concentration camp.

She was made an officer of the Legion of Honour in 2007.