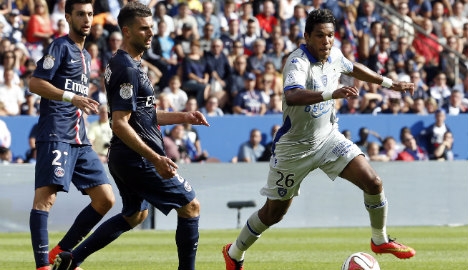 PSG's Thiago Motta (L) was left with a bloody nose after an incident with Brandao (R). Photo: AFP

The 34-year-old will appear in court on November 3 on charges of committing premeditated assault in a sporting arena and causing his victim to be signed off work for seven days.

The Paris Public Prosecutor's department had launched a preliminary investigation into the incident last Saturday at the Parc des Princes, which was filmed by CCTV cameras inside the tunnel.

"This is just the logical next step in the process," said Brandao's lawyer Olivier Martin, attempting to play down the situation.

He added that Brandao "firmly disputed having committed the offence in a premeditated manner" and that the length of sick leave reportedly required by Motta "must be disputed."

If the offence is determined to have been premeditated, however, the Brazilian could be handed a prison sentence rather than a simple fine.

The fact that the offence took place in a sporting arena could lead to the player being handed a ban from entering a stadium for up to five years.

It is the latest piece of bad news for Brandao, who on Thursday was provisionally suspended until September 18 by the French league (LFP) for his headbutt on Motta at the end of last Saturday's Ligue 1 clash at the Parc des Princes, which PSG won 2-0.

Mr Martin explained that his client will appear at a full LFP hearing on Thursday, September 18 into the incident, which left Motta with a fractured nose.

French Football Federation (FFF) rules allow for a ban of anything from eight matches to two years for such an offence.

The former Marseille striker was suspended for four matches last season for elbowing PSG's Yohan Cabaye at the Parc des Princes while playing for Saint-Etienne.

Bastia coach Claude Makelele left Brandao out of his squad for Saturday's match against Toulouse, explaining that he had taken the decision to drop him "due to the need to protect the player and his entourage faced with pressure from the media."

Bastia have "condemned without ambiguity" the player's action, but PSG are furious at the lack of a more concrete response from the Corsicans.

Despite his broken nose, Motta was named in the PSG squad for Friday's match away to Evian. PSG continued their sluggish start to the season after the game ended in a scoreless draw.