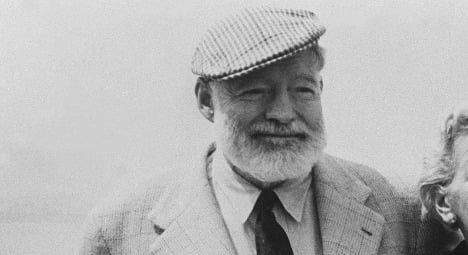 Ernest Hemingway, who famously liberatied the Ritz bar in Paris (after the Germans had gone). Photo: AFP

The liberation of the bar of the Ritz Hotel in Paris by the writer Ernest Hemingway 70 years ago, as the French capital was freed from its Nazi occupiers, is the stuff of legend.

Hemingway, a war correspondent for the American "Collier's" magazine who went on to win the Nobel prize for literature in 1954, was embedded with US 4th Division troops that landed on the Normandy beaches on June 6, 1944.

Over the next two months he stuck with the foot soldiers as they marched towards Paris in support of the French 2nd Armoured Division, which entered the capital on August 25.

Hemingway had a special attachment to the luxurious Ritz hotel, and its bar, where he had spent a great deal of time before the war.

"When I dream of afterlife in heaven, the action always takes place in the Paris Ritz," Hemingway was to say.

"He did not talk about anything else," one Resistance fighter said, but "to be the first American in Paris and liberate the Ritz."

Hemingway managed, using his name and with the help of the American army commanded by US General George S. Patton, to wrangle a meeting with French commander General Philippe Leclerc. His request: to be given enough men to go and liberate the Ritz's bar.

To the writer's surprise he got a frosty reception and was dismissed.

But Hemingway persevered and on August 25, dressed in his correspondent's uniform, he arrived in a commandeered jeep with a machine gun and a group of Resistance fighters at the hotel, on Paris' lovely Place Vendome.

He burst into the hotel and announced that he had come to personally liberate it and its bar, which had been requisitioned in June 1940 by the Nazis and occupied by German dignitaries, including on occasion Hermann Goering and Joseph Goebbels.

The manager of the hotel, Claude Auzello, approached him and Hemingway asked: "Where are the Germans? I have come to liberate the Ritz."

"Monsieur," he replied, "They left a long time ago. And I can not let you enter with a weapon."

Hemingway put the gun in the jeep and came back to the bar where he is said to have run up a tab for 51 dry Martinis.

According to his brother, Leicester Hemingway, the writer searched the cellar with his men, taking two prisoners and finding an excellent stock of brandy.

Inspecting the upper floors and roofs they found nothing, except for sheets that they riddled with bullets.

Hemingway wrote later that he could not stand the thought that the Germans had soiled the room he shared with Mary Welsh, who he would marry in 1946.

"He wore the uniform and gave orders with such authority that many thought he was a general," the Ritz's head barman Colin Field remembered.

The hotel, closed for renovations since 2012, named a smaller bar after Hemingway in 1994.

Hemingway was broke when he discovered the Ritz in the late 1920s in the company of Francis Scott Fitzgerald, before he became known for such works as "The Sun Also Rises" and "Farewell To Arms".