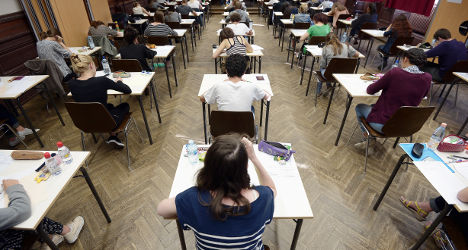 Expat parents need to weigh up whether to send the kids to local or international school. Photo: Frederick Florin/AFP

Of all the choices expats have to make in France there is perhaps none more personal and complicated than deciding what type of school to send their kids to.

Should you go native and put the kids straight into a local school and immerse them in French culture? Or how about sending them to an international school where they may have the option of a UK or American education?

They are tough choices because not only is your child’s future at stake, but there's also issues of national identity, not to mention cost – international school tuition can range from around €9,000 to €24,000 a year – plus the standard of what's available locally.

While there are some 64,300 state-run schools in France, there are just over a dozen private international or bilingual institutions in the country.

Is there a right choice to make when it comes to which route to choose? We've asked a selection of expat parents to explain the reasoning behind their decision.

For British expat Tracy Thurling, who’s lived in France for over 25 years, there was little hesitation when registering her son and daughter for a local French school.

“The kids were born in France and our intention is to make France our home,” said Thurling, a wine tour guide in Burgundy. “We felt it was important the children get a total French cultural experience.

“People sometimes ask if we ever think about going home. I always tell them, ‘This is home.’”

For Thurling French is the language of school, but it switches to English when the kids are with their parents.

“At home we have a total British environment: TV, books and speaking. Everything we do is in English,” she said. “Though we did get French cable too so the kids wouldn’t feel isolated if their friends were all watching a particular show.”

For her being bilingual is the future: “This is not us waving the British flag. In the future they are going to need to be bilingual.”

SEE ALSO: The dos and don'ts of raising bilingual kids But not everyone with experience of putting children through French school system would recommend it.

Francis Grady, a longtime Scottish expat in France, put her three sons through French state schools in the 1980s and 1990s, however she says she wouldn’t do it today and points to a decline in standards of the French system.

“I don’t think the French education system is what it used to be. There’s been an overall decline in quality,” she said. “I would definitely put my kids in an international school if I were raising them today.”

For her, it was purely practical to enroll her boys in the British School of Paris, where lessons are taught in English. Her family came over to France about two years ago for her husband’s job, and won’t be staying long term.

“The boys are too old to start their education in France,” she said of her two teenage sons. “We don’t know when we are going back. So we need to able to slip back into the British education system.”

Also the boys don't speak French: “It’s just a matter of practicality. If you had to learn physics and chemistry in a language you wouldn't understand and it wouldn’t be too much fun.”

The language and continuity of her kids’ education wasn’t the only upside of the international school for Wilson. She says they’ve found something of a community at the British School.

“The international school is great if you are an expat. They are used to people coming and going, so they have events and lots of information to help you,” she said. “They don’t just welcome the kid, they kind of welcome the whole family.”

American expat Andrea Richardson and her family are also only in the City of Light for a limited time because of work and so it was important to keep the kids on an American school curriculum.

But in the three years the family has been in the Paris suburbs she has encouraged her son and daughter to get out of the expat bubble.

“I highly encourage getting your kids involved in extracurricular activities outside of school,” Richardson said. “They can learn the language, they are sponges. You just have to push them to get out there.”

There is also a third way in the international versus local schooling debate. Conveniently for expats, France has a number of public and semi-public bilingual schools around the country. Though it's important to remember some bilingual schools only accept kids who already speak both languages and there is a cost involved that ranges from €700 to €7,000 per year.

That mix is what convinced expat Sara Pax, who’s originally from the UK but spent decades in the US, to put her daughter in a semi-private bilingual school Ecole International Bilingue Monceau (EIB).

“I really wanted (my daughter) to get a solid education in French. I also wanted her to speak English well enough that she could go back to live and work in the states,” Pax said. “French public schools don’t teach to the right level of English so we went with EIB.”

Yet Pax, who plans to stay long-term in France, wanted to avoid having her child in an expat bubble.

“For people who are here for just two years, I don’t blame them for going with an international school. They’re just waiting to be sent off to the next place,” she said. “But if you are here you might as well take advantage of it. You’re not in some compound in Qatar. You’re in Paris.