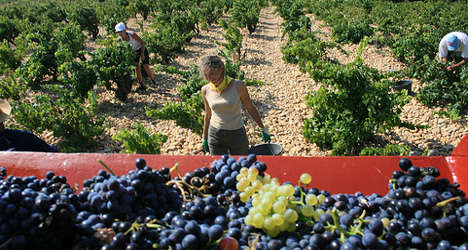 France is set for a much better wine harvest than last year. Photo: Jean Louis Zimmerman/Flickr

France will produce around six billion bottles of wine this year, a more successful harvest than in recent years, forecasts from the country's public agricultural authority predicted on Friday.

The harvest is expected to come in at around 45.4 million hectolitres (6.051 billion bottles), an about average amount, FranceAgriMer said.

"After two years of excessively low harvests, we're getting somewhat back to normal … we see good prospects at the start of this harvest," said Jerome Despey, head of FranceAgriMer's wine division.

Production is due to be up in the Champagne region but down in Languedoc-Roussillon, an area that was blighted by drought in spring, then hail.

France suffered two exceptionally poor harvests in 2013 and 2012, which saw record-low production due to cool temperatures and excessive rains.

Some vineyard owners in famed wine regions like Bordeaux and Burgundy saw their harvests nearly wiped out by severe hail storms.

However when it came to another crop, the outlook is not looking so positive.

It was reported this week that France has been forced to import tens of thousands of tonnes of wheat from the UK to make up for a short fall.

That's despite France being Europe's biggest producer and exporter of the cereal.

This week some 3,000 tonnes of UK wheat arrived in the port of Dunkirk and a second load of 4,400 tonnes from the UK was unloaded in Rouen on Thursday.

"It is a rare phenomenon. British cereal farmes, who produced a reasonable quality of wheat this year, are regular suppliers to France but in general it is more used as animal feed, " cereal broker Damier Vercambre told Le Figaro.

France has been forced to import wheat after unsuitable weather – a hot July followed by heavy rain in August –  throughout the summer left it with a short fall and unable to honour its export contracts.