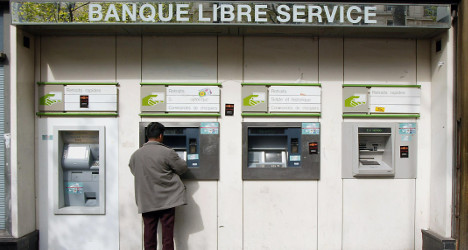 Is that ATM facade real or was it printed at home by a crook? Photo: Jacques Demarthon/AFP

The man, named Hamid P, used the printer to produce fake facades of ATM machines so he could clone the card details of hundreds of people.

The 24-year-old then used the details to withdraw tens of thousands of euros from abroad.

The scam came to light in 2013 when the Caisse d’Epargne discovered two false fronts on bank machines in the towns of Nimes and Saint-Ambroix.

Credit card readers, known as skimmers, which register card details, were discovered behind the fake fronts.

“The fake fronts were of a good quality and were different to those we normally see,” a judicial source told Le Parisien newspaper.

Hamid P was able to steal around €30,000 before he was caught, thanks to the fact that he had made the mistake of using his own card in one of the machines to see if it worked.

It was only when he was arrested this month that the police found the 3D printer at his home and he admitted to the scam, Le Figaro reported.

He has been charged with fraud.

As far back as 2011 there were warnings that the revolutionary printers were being used by criminals to print off everything from keys and even guns.

And in September 2011 an American gang was prosecuted for stealing more than $400,000 using fake ATM fronts made using 3D printers.