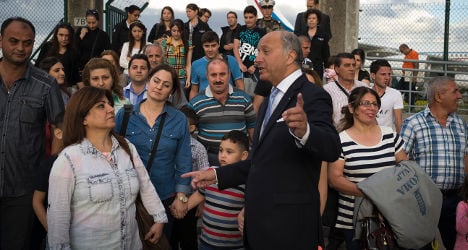 The first of hundreds of Iraqi refugees have arrived in France. Photo: Joel Saget/AFP

French Foreign Minister Laurent Fabius personally welcomed about 40 Iraqi Christians at a Paris airport, saying France had evacuated them because their lives are in danger.

"In the coming weeks, there will be hundreds more," Fabius said, according to AFP. "There is a considerable number of Christians, Yezidis, or other minorities who want to get out of Iraq and Kurdistan."

The groups are fleeing because they have been threatened and brutalized by armed militants from Islamic State of Iraq and Syria, which wants to create an Islamic religious state in the Middle East.

Thousands of Christians and other minorities have fled the northern Iraqi city of Mosul and other areas after Islamic State of Iraq and Syria insurgents led a sweep across Iraq's north and west last month.

The militants had ordered Christian families to convert to Islam or leave the city, prompting the mass exodus.

Those who failed to comply were threatened with execution, and the property of those who left was forfeited to the Islamic State, a statement from the group seen by AFP said.

The refugees who arrived on Thursday were flown to France aboard a cargo plane that had just airlift 21 tonnes of humanitarian aide into the city of Erbil in the Kurdish region of Iraq, where some 600,000 internal refugees have gathered since the ISIS offensive.

Speaking at the airport, Fabius said the refugees were given priority because they had some connection with France, including some who have family here they "haven't seen for 10-15 years."

Some 8,000 Iraqi Christians have applied for visas to France in Erbil since France said last month it would offer them asylum from ISIS militants.