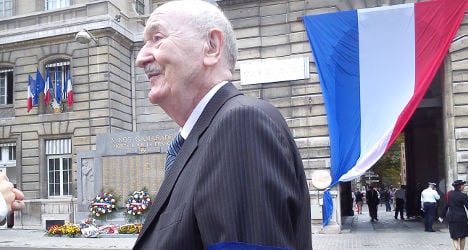 For David Leiba, three dangerous years of living underground as a Jewish French resistance fighter ended with a single phone call in August 1944.

He and 19 other fighters were protecting the switchboard at the Bastille Metro station in Paris, which unbeknownst to the Germans was being used as a resistance communications hub.

A call came in seeking urgent reinforcements at the city’s main police offices, the Prefecture de Police, in central Paris. Columns of German soldiers were streaming past and the resistance fighters needed help.

The homegrown rebellion to take back the city from its Nazi occupiers, sparked by a public transport and police strike, was finally underway, four years after Paris fell to the Germans. The outcome, however, was still far from certain.

Leiba was among five men who volunteered for the fight.

“In order to get there faster we walked along the Metro tracks. The trains weren’t running,” he told The Local this week at a ceremony in Paris marking the 70th anniversary of the capital's liberation.

(The honour guard at a commemoration ceremony in Paris. Photo: Joshua Melvin/The Local)

"There was an entrance directly into the prefecture from the Metro. We arrived in the plaza and there was a scene like today, lots of people. They had come from all over," Leiba said.

By the time they arrived the prefecture was under the control of thousands of French police and resistance fighters.

Leiba could see the German armored vehicles and troops flowing past the prefecture on their way through the city, but incredibly they weren’t stopping. They were retreating.

SEE ALSO: Ten things you need to know about the Liberation of Paris

By August 25th 1944 the Germans had formally surrendered. The war was over in the capital.

“It was extraordinary. The whole night people kept heading into the streets to run and sing,” said Leiba, now aged 90.

“I was able to resume my life as a civilian. I’d lived three years underground," he said, wearing the armband he'd donned during the rebellion and which identified him as a resistance fighter.

(This is Leiba's resistance armband from the Liberation. Photo: Joshua Melvin/The Local)

But for Leiba it was difficult to celebrate. His mother had been taken away by the Nazis two years prior, as had much of his family, and the woman he loved was somewhere in the city, unaccounted for and hopefully still alive.

Though he would eventually find and marry Elka “Héléne” Melcer, who would remain his wife for almost the next seven decades until her death, there was no good news about his mother.

Leiba had watched as she was hauled off by the police on September 25th 1942. But before she was taken, his quick-thinking mother had rushed her 17-year-old son under a bed in a backroom and he hid there as she spoke to police.

“I’m still alive because of my mother. For a second time, she gave me the gift of life,” he said. "She was taken along with the rest of my family, even my extended family, and they were burned in Auschwitz.”

IN PICTURES: The battle for the Liberation of Paris

That moment began his life as an underground fighter. He crossed the country from north to south with fake identity papers along with a small group of classmates who formed their own resistance group: the "Sixth Column."

All of the members were Jewish and most of their efforts were directed at helping other Jews hide their children and themselves from the horrors of the Holocaust that saw millions like them murdered. In fact it was that work that had led Leiba to his future love.

He'd helped a family, which included nine children, find refuge from Nazi roundups. In the process of aiding them he met their daughter Melka. And as soon as the fighting ended he had just one goal.

“I didn’t take part in the parade on the Champs Elysées on the 26th because I had one thing on my mind: that young woman,” he said.