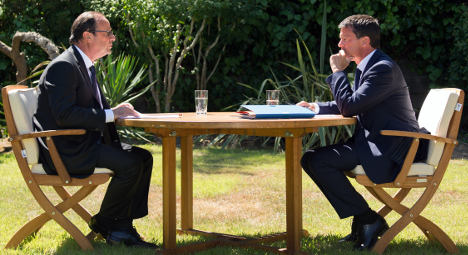 The government on Wednesday will hold its first cabinet meeting of what is known as the political "rentree," or return from holidays, just a week after the finance minister admitted the economy had "broken down," with zero growth over the past six months.

Prime Minister Manuel Valls had already warned the autumn months would be "difficult," with France's unemployment at a record high and the European Union increasingly worried about the country's budget deficit.

The government was forced to slash this year's growth forecast in half to 0.5 percent after figures showed the economy failed to grow in the second quarter after stagnating in the first three months.

"We have growth that is far too weak, in France and in Europe," complained Valls after a meeting with Hollande to prepare the ground for September.

Adding to Hollande's economic problems, France appears to be spiralling down into a deflationary cycle because of a lack of activity, with prices actually slipping backward last month.

"What the French are desperately waiting for are solutions or, if possible, results. But they can't see either of those things," fumed an editorial in the center-left Le Monde daily.

"For the head of state, the challenge is considerable … he has to come up with answers. No matter what the political risk."

Hollande's main response to France's economic plight also experienced a major setback during the holiday months, as the Constitutional Court slapped down part of his "Responsibility Pact," which he hoped would create jobs and kick-start the economy.

The court rejected a key plank of the reform that would reduce social charges for low-income employees, dashing hopes of sparking consumption by putting more money in workers' pockets.

But Valls insisted: "Yes, the policies that the president has put in place will take time to produce results, but there is no question of changing course."

A survey by polling institute IFOP in the Journal du Dimanche showed that more than eight in 10 French people had no confidence in the government when it came to economic growth, reducing the deficit, or fighting unemployment.

"There is an extremely strong sense of mistrust, of worry, of defeatism in the face of the crisis," IFOP analyst Frederic Dabi told AFP.

"The presidency has broken down, and we're only in the middle of the five-year term."

Capping what left-leaning daily Liberation called an "Augustus horribilis" for Hollande, a top member of his own socialist party, Martine Aubry, launched a vicious broadside at the French leader over plans to change the country's regional boundaries.

"For the past two years, in all areas, if we had had some vision and a method, we would have had fewer problems," Aubry said.

The plan to redraw the map of France, cutting the number of regions to 13 from 22, is likely to be one of the most controversial political issues of the autumn.

The radical left party, a small coalition partner with one minister and two junior ministers in Hollande's cabinet, has threatened to resign from the government if it is "not heard" on the issue of regional reform.

And lurking in the wings is political rival Nicolas Sarkozy, who has vowed to decide in the coming months whether he will re-enter French politics.

Beset with legal difficulties, the center-right former president has been weighing up whether to stand for the leadership of his embattled UMP party.

However, some analysts suggest a Sarkozy return could even prove to be a boon for Hollande as the president might benefit from going up against such a divisive figure.

"Nicolas Sarkozy is the best opponent Francois Hollande could dream of for the next presidential election" due in 2017, political analyst Stephane Rozes, told AFP.

Sarkozy is "embroiled in legal difficulties, and every time he comments on an issue, he splits his own camp."