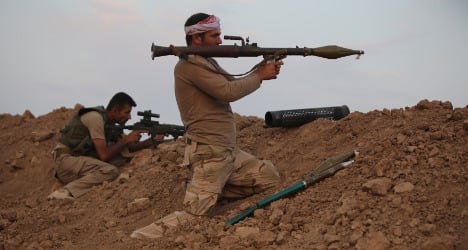 France's foreign minister on Wednesday pressed "all countries in the region" as well as Iran to join Western nations in the fight against Islamic State fighters rampaging through Iraq and Syria.

"We would like all the countries of the region to join in this action (that includes the Arab countries and Iran), but we would also like the P5 to join in with this action," Laurent Fabius told a parliamentary committee, referring to the five permanent members of the UN Security Council.

"We believe that this terrorist group is of a different nature and level of danger than others. As surreal as it may seem, this group considers Al-Qaeda too soft."

He warned that IS's ambitions spread far beyond the borders of Iraq and Syria.

"Today it's Iraq. But the Caliphate is the whole of the region. And beyond that region, there's obviously Europe."

We are all "people to be destroyed and slaughtered because the goal and raison d'etre of this gang is to kill anyone who does not submit to them," added the minister.

Earlier in the day French President Francois Hollande said he would next month arrange an international conference on the threat posed by Islamic extremists in Iraq, describing the current international situation as "the most serious since 2001".

"I think we are in the most serious international situation since 2001…I will therefore propose an initiative on security in Iraq and the fight against Islamic State, from September," Hollande told Le Monde daily according to a text released in advance by his office.

"We can no longer keep to the traditional debate: intervention or not. We must come up with a global strategy," said Hollande, who plans to invite the UN chief of security and several Middle Eastern countries.

"I ensured that these deliveries were done with the full agreement of the authorities in Baghdad, so there was no doubt about the use of this material," Hollande said, adding that the weapons would have to be used "within the framework of Iraqi unity".

He said the international community bore a "heavy responsibility" for what is happening in Syria, with its knock-on effects in Iraq.

"If, two years ago, we had acted to ensure a transition, we wouldn't have had Islamic State.

"If, one year ago, the major powers had reacted to the use of chemical weapons, we wouldn't have had this terrible choice between a dictator and a terrorist group," adding that the rebels "deserve all our support".

Hollande's words hit the media not long after Islamic militants released a video that shows the beheading of American journalist James Foley, who had been held captive since disappearing in Syria in November 2012.

The gruesome video, which is narrated by a masked Islamic State fighter speaking with an apparent British accent, has prompted UK Prime Minister David Cameron to cut his holiday short and return to London.

"The Prime Minister is returning to Downing St. this morning. He will meet with the Foreign Secretary and senior officials from the Home Office, Foreign Office and the agencies to discuss the situation in Iraq and Syria and the threat posed by ISIL terrorists," according to a statement from his office.