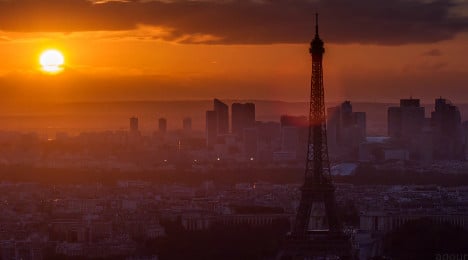 "I wanted to capture Paris in all it's glory". Photo: Screengrab Paul Richardson

"I had never visited the city before, and was quickly struck with how beautiful it is," says Richardson.

The filmmaker spent three weeks in Paris, capturing the essence of the French capital from its most famous monuments, to cafe goers, Velib users and the daily goings on in the high-rise financial district of La Defense.

"My aim was to capture the classic sights; ornate buildings and typical Parisian activities, and contrast that to the modern business side, towering glass glad skyscrapers and fast paced life," he said.

After three weeks of shooting day and night, he then spent five weeks editing his clips.

"I think in total I spent over 400 hours working on this project, which means that every single second of video took two and a half hours to produce," he said.

Most web users who have seen the video liked what they saw.

"That was amazing. Now I gotta go back to Paris," said one.

Others were a little less positive, with one commenter poiting out that in reality, life for Parisians was very different to that captured on Richardson's film.

"Very nice video… But this is not the real Paris, this is Paris for tourists," reads the comment.

Judge for yourselves by watching Richardson's video below.

To find out more about Richardson and his work you can find him on Facebook.