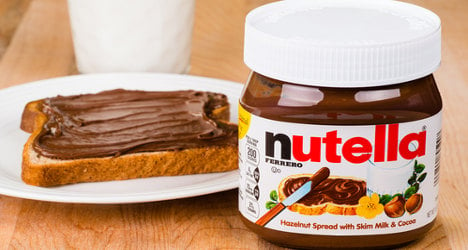 Nutella lovers may take a hit in the pocketbook due to a shortage. Photo: Nutella/Rob Heiner

There’s no warnings of a Nutella shortage just yet, but a poor hazelnut harvest has prompted speculation the beloved chocolate spread could be a bit more dear this year.

Nasty weather has made a serious dent in the hazelnut crop in Turkey, which produces some 70 percent of the world’s supply of the nut.

Not surprisingly, given its popularity, about 25 percent of Earth’s annual production of hazelnuts goes to Nutella's maker, Italian company Ferrero. It churns out 365,000 tonnes of the spread each year.

Much of the Nutella production doesn't have to go far to get eaten. Europeans love it, with the French second only to the Germans as the world's top consumers of the paste.

Famously secretive Ferrero has reportedly not commented for the moment on whether the price will go up in future, but thankfully for Nutella lovers there's no sign of a spike just yet.

French supermarket chain Carrefour was selling 440 gram jars of Nutella for €2.85 on Tuesday, a price that's been stable for some time.

It’s not clear yet how badly the Turkish crop has been damaged, though traders have estimated there could be a shortage of up to 260, 000 tonnes of hazelnuts in 2014.

In the past six months the wholesale price of the nut has exploded, with the cost jumping from €5,000 a tonne to €8,500, French daily Le Parisien reported.

This of course isn’t the first time hazelnuts have fallen victim to the vagaries of the weather. Heavy frost in 2003 and 2004 ravaged the Turkish nut crop and sent wholesale prices spiralling.

But there was no great Nutella shortage and while prices went up, the increase was reportedly modest.

Nut troubles are just one of the threats facing Nutella, however. A world chocolate shortage is on the horizon because cocoa bean plantations are being turned into more profitable rubber tree farms. Some estimates have predicted a shortage by 2020.

Also French politicians have already taken a pop at the spread, by trying and failing to slap a heavy tax on one of Nutella’s other key ingredients: palm oil. It was a move to fight obesity, but died in the French legislature amid criticism from food makers.