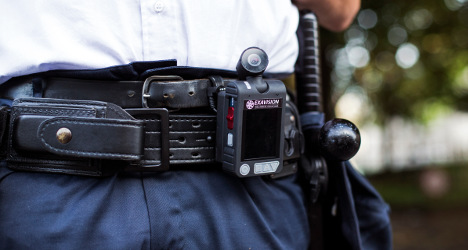 Mobile, body-mounted cameras like the one seen above are to be worn by French police in future. Photo: Fred Dufour/AFP

The famous blue uniform of the French police will have a subtle extra addition in future after authorities decided to equip thousands of officers with special body-mounted cameras.

Around 4, 500 have been ordered and will be worn mainly by officers working in high crime areas, the country’s Interior Ministry confirmed this week.

According to Le Figaro, which first reported the story, the cameras weigh 235 grams and contain six hours of memory.

They are mainly designed to record footage of identity checks in the street. The objective is to record evidence of any sensitive arrests or stops as well as dissuade people from being aggressive.

It will be up to police whether or not the start the recording.

Officers in France’s gendarmerie – which works in mainly rural areas will also be equipped with the cameras in the future.

The cameras were given the green light after a year-long experiment proved successful, with police unions reporting that people behaved differently when they were arrested if they noticed they were being filmed.

“It also takes a huge burden off the police,” Richard Mousset, General Secretary of the SDPM union told France 24. “Very often suspects who have been arrested make complaints of police abuse or racism and these are nearly always followed-up with some kind of enquiry.”

“With filmed evidence, these complaints are obviously far fewer,” he added. “The police can do their jobs with confidence.”

Critics, however, say the fact police can decide when to start recording means the cameras will offer no guarantee that the officers will behave in the right way.

In May this year police chiefs in London also decided that officers would start wearing cameras in a bid to improve transparency and boost convictions. A trial saw 500 devices distributed across London.

Met Commissioner Sir Bernard Hogan-Howe said: "Our experience of using cameras already shows that people are more likely to plead guilty when they know we have captured the incident.