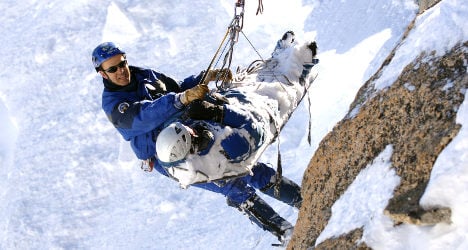 At 4,810 metres (15,781 feet) Mont Blanc is the tallest peak in Europe. But with numerous deaths each year the Mont Blanc massif has a reputation for being one of the dangerous in the world.

The 2014 summer climbing season has been particularly tragic, with several groups going missing or tumbling to their deaths. Factors like the ease of access, the challenging conditions and poorly equipped or inexperienced climbers all contribute to the death toll.

Here's a look at some of the worst accidents in recent years:

August 12th 2014: A guide and five other seasoned climbers were killed on “l'Aiguille d'Argentière” part of the mountain.

July 2nd 2013: Three police officers died after falling off the north face of the “Aiguille de Midi,” in the Mont Blanc range.

July 12th 2012: Climbers from Switzerland, Germany, the UK and Spain, nine in total, died in an avalanche on Mont Maudit in the Mont Blanc range.

July 17 2009: Three Lithuanian climbers were killed in the “Gouter” corridor, also known as the “Corridor of Death” due to the number of rock falls there, while climbing Mont Blanc.

August 24th 2008: Eight climbers from Switzerland, Austria and Germany were killed in an avalanche triggered by falling ice blocks on Mont Blanc.

August 7th 2007: Three German climbers fell to their deaths near the “L’Arête du Dôme” in the Mont Blanc range.

July 24th 2007: Four mountaineers lost on the “L’Arête de Bionassay” in the Mont Blanc range were killed by hunger and fatigue.

June 23rd 2006: A guide and two climbers slipped and were killed in a fall while descending Mont Blanc peak.

July 17th 2005: Three climbers, members of the Le Mans chapter of the French Alpine Club, were killed in a 400-metre fall while making their descent on the Mont Blanc range.