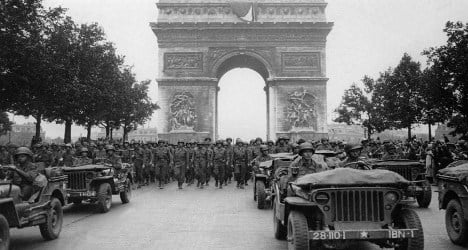 Paris has planned a series of events to mark the 70th anniversary of its liberation. Photo: AFP

It was August 15th 1944 when Paris Metro drivers as well as military and city police called a strike, it signalled the start of a rebellion that would end the four-year Nazi seizure of the capital.

To mark the anniversary, France’s Prime Minister Manuel Valls and Interior Minister Bernard Cazeneuve will speak on Tuesday at Paris’s Prefecture de Police in a “solemn homage” to the police uprising.

Four days after some 2,000-3,000 Paris police went on strike, they took up arms against the occupiers, kicking off the insurrection that would end on August 25th 1944 with the German forces surrendering and fleeing the city.

The liberation marked the end of Nazi control of the City of Light, which had been in place since June 1940. It was also the close of a dark chapter for the parts of France that had chosen or been forced to collaborate with Nazi Germany.

While Paris police sparked the rebellion, they also had helped Nazi forces round up some 13,000 Jews in the capital in June 1942. It’s part of the history of Paris police that the force still has “quite a bit of trouble facing up to,” an unnamed prefecture official told AFP this week.

Police officers were just a part of the effort to liberate Paris that included resistance fighters, the Free French Army and American forces.

The ad hoc liberation army even included the Ninth Regiment, nicknamed ‘Nueve’, because nearly all its 160 soldiers were Spaniards. A ceremony in honor of the unit is set to take place on Sunday, with the regiment’s only surviving member Rafael Gomez due to attend.

Unlike other European capitals such as London and Berlin, Paris escaped the war without being flattened. Though the early French surrender played a role, the reasons for the relatively little damage during the liberation remain controversial.

After the war, the German commander of the city, General Dietrich von Choltitz, dubbed himself the saviour of Paris for disregarding Adolf Hitler's repeated orders to level the city before it fell into enemy hands.

The general took command in Paris on Aug 8, 1944 and at a meeting in Germany the day before, Hitler told him to be prepared to destroy all religious and historic monuments.

Hitler is then believed to have given the order by cable, telling General von Choltitz to turn the capital into a "pile of rubble".

On the eve of the capital's liberation, Hitler was still demanding to know: "Is Paris burning?"

“If for this first time I disobeyed (an order), it was because I knew Hitler was crazy,” Choltitz reportedly said in an interview and in his book titled "Is Paris Burning?"

However, many in France believe the insurrection and the allied advance were overwhelming and Choltitz gave up quickly because he had to. The depiction of him as the saviour of Paris has been described as a “falsification of history” by surviving French resistance fighters.

After four years of the abuses of occupation, Parisians moved quickly to seek revenge against those who had close ties to the Germans. Members of the Milice Française, a Gestapo-like French paramilitary group that worked with the Nazis, were imprisoned and executed.

Also, women accused of “horizontal collaboration” for supposedly carrying on relationships with Germans had their heads shaved and were paraded in public for ridicule. Some of the women were even beaten by mobs of angry Parisians.

Here are some other anniversary events: