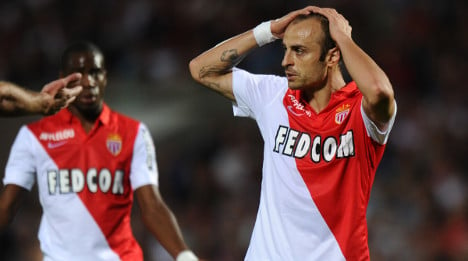 Monaco suffered a second defeat in as many games this season as Bordeaux came from behind to beat the principality club 4-1 in Ligue 1 on Sunday.

Dimitar Berbatov gave the visitors the lead at the Stade Chaban-Delmas just before half-time, but having lost at home to Lorient last weekend, Leonardo Jardim's side collapsed in the face of a brilliant Bordeaux second-half performance.

Two goals from Uruguayan striker Diego Rolan and penalties from Emiliano Sala and Wahbi Khazri made it two wins out of two for Les Girondins, who are top of the fledgling table with a maximum six points after a fine start under their new coach Willy Sagnol.

Jardim hit out at the referee, claiming the official made two crucial errors which altered the course of the game.

"After those mistakes, there was no match," said the Monaco coach.

"But we have to keep working and believing in the players. I am convinced also that there'll be no more errors, I believe that French referees are good referees."

Radamel Falcao was again left on the bench at kick-off for Monaco, although Jardim did make five changes to his team, including recalling Jeremy Toulalan in midfield.

Goalkeeper Danijel Subasic had to beat away a Khazri free-kick, but Monaco took the lead in the final minute of the opening period when Valere Germain's right-wing cross was headed into the net at the far post by Bulgarian striker Berbatov.

Sagnol, who played in the last Monaco side that won the title in 2000, reshuffled his tactical set-up at the break and Bordeaux required only three minutes to draw level, Rolan turning the ball in after Julien Faubert's cross had been headed back across goal by former Bayern Munich full-back Diego Contento.

Argentine striker Sala, making his first Ligue 1 start, then scored from the penalty spot after Aymen Abdennour was harshly adjudged to have fouled his fellow Tunisian Khazri inside the area.

Monaco sent on Falcao but they fell further behind in the 65th minute when Rolan, in an offside position, converted after Lamine Sane had headed on a free-kick.

And there was worse to come with quarter of an hour remaining as Khazri scored from the spot after drawing a foul from Subasic just inside the box as the Monaco defence imploded.

Saint-Etienne are the only other side to have won their opening two matches after they also came from behind to beat Reims 3-1 at the Stade Geoffroy-Guichard.

Loic Perrin deflected a Benjamin Moukandjo shot into his own net to give Reims – who held champions Paris Saint-Germain last week – an interval lead, but Max-Alain Gradel, Kevin Monnet-Paquet and Mevlut Erding all found the net in the second half for Les Verts.

However, like Jardim, new Marseille coach Marcelo Bielsa is finding the adaptation to life in Ligue 1 something of a challenge.

After OM threw away a two-goal lead to draw 3-3 in Bastia last week, his first home game at the helm ended in a chorus of jeers after a deflating 2-0 defeat to southern rivals Montpellier, whose goals came from Anthony Mounier and Morgan Sanson.

The Stade Velodrome was holding its first game since work finished on a new main stand, completing the refurbishment done for Euro 2016, which France will host, and the game was watched by a crowd of more than 50,000.

"I am not satisfied. One point out of six against opponents who are expected to finish in the bottom half is not a very good outcome," admitted Bielsa, although he added: "I think there were more things of value in the match than things that we need to fix."

Calls for ban after headbutt on Motta

On Saturday, PSG brushed aside SC Bastia 2-0 with Lucas and Edinson Cavani on target, but their win was overshadowed by the early loss of Zlatan Ibrahimovic due to a side strain and an after-match incident in the tunnel which saw Bastia's Brazilian striker Brandao headbutt Thiago Motta, leaving the PSG player with a fractured nose.

Images from surveillance cameras in the tunnel at the Parc des Princes, obtained by several local media outlets, appeared to show Bastia's Brazilian forward Brandao waiting for Motta to approach him before headbutting the Brazil-born Italy international.

A mass altercation then ensued, and PSG president Nasser Al-Khelaifi told beIN Sports that Motta's nose had been fractured in the incident.

Al-Khelaifi also called for serious action to be taken against Brandao, the 34-year-old former Marseille player.

"I hope that the Bastia player who did that is very severely punished. A heavy punishment is required," he said.