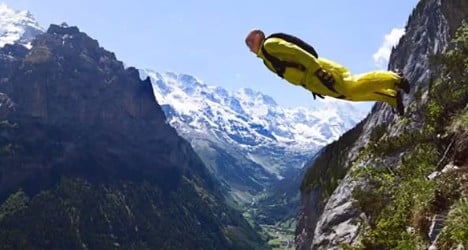 An Australian base jumper (not the one pictured here) was one of two jumpers killed in the Alps at the weekend. Photo: Top World News

Two base jumpers were killed in separate accidents in the French Alps on Sunday after parachuting off mountains in their wingsuits.

Their deaths bring to four the number of people killed taking part in the extreme sport in France since the beginning of August.

Police said the first victim, a 33-year-old Australian, died after jumping off the 2,600-metre (8,500-feet) Brevent peak in the Haute-Savoie.

Rescue workers said he was found "several hundred metres below in a wooded area" and probably died on impact.

Two hours later a French base jumper was killed after hitting a rock face on his descent from Mont Granier in the neighbouring Isere region of southeastern France.

The man, aged 52, and described as "extremely experienced", was found 200metres below the ledge from which he had jumped.

"He managed get over the first rock face, but not the second," one of the rescuers said.

Investigations have been launched into both accidents.

On August 6, two base jumpers, one from Switzerland, the other from France, died in similar accidents in the Alps and French Pyrenees.

Unlike skydiving which involves leaping from an aircraft, base jumpers takeoff with a parachute from a fixed point, usually a cliff or a bridge.

The sport carries high risks. A Norwegian study published in 2007 concluded that base jumping is five to eight times more likely than skydiving to result in injury or death.