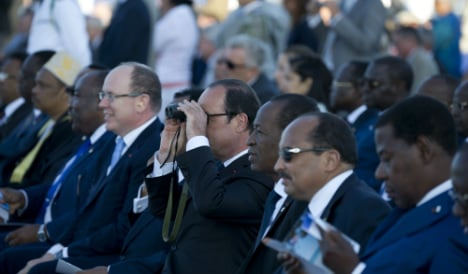 After a colourful military ceremony on the aircraft carrier Charles De Gaulle under clear blue southern France skies, Hollande said Europe "should never forget that its salvation came from the south."

Hollande was joined on the carrier by 15 leaders from France's former African colonies, in recognition of the key role soldiers from these countries played in liberating France, two months after D-Day smashed the first hole in Germany's defences.

Around 240 veterans, many in their 90s, also took part in the commemorations on the vast grey warship, anchored off Toulon.

The actions of the troops from Algeria, Morocco and Tunisia but also from former colonial possessions in sub-Saharan Africa were "decisive," Hollande said.

"By their sacrifice, these men bound our country to Africa with a bond of blood that no one can undo," said Hollande.

"To the youth of Africa, I want to say that we have not forgotten, even if France took too long to learn the lessons in terms of emancipation and recognition," he stressed.

And he pledged that Europe owed the countries to its south "what it gave us in 1944 — support, solidarity, development."

After his speech, Hollande warmly greeted veterans, resplendent in their military uniforms and medals, many confined to wheelchairs.

One veteran, 94-year-old Armand Conan, told AFP: "Seventy years after the liberation, our role as former Resistance fighters is to pass on to the current generations the values that inspired the national Resistance Council."

Dieng Tidiane, a former Senegalese infantryman, said he was "very emotional" to return to the shores of the country he helped liberate seven decades ago.

Hollande's wide-ranging speech, which covered global crises ranging from Ukraine and Iraq to the Ebola epidemic, was followed by a naval parade of 19 warships from various former Allied countries and a spectacular aerial display.

The southern landings — much less well-known than the Normandy landings on D-Day on June 6th — were however pivotal in pushing the Nazi army back towards Germany and hastened the end of World War II in Europe.

After the success of D-Day, the Allies desperately needed to secure the deep-water ports of Toulon and Marseille to resupply troops for the eventual push towards Berlin.

Following much debate between the Allied leaders — then British Prime Minister Winston Churchill preferred a Balkan invasion — "Operation Dragoon" was launched on the beaches near Marseille on August 15th 1944, with a total force of 450,000 men.

In contrast with the Normandy landings, where there was only a token French army presence, more than half (250,000) of the invading force was French.

In turn, this French force had a large number of troops from France's then colonies, mainly from Algeria and Morocco, but also infantry from Senegal and soldiers from Pacific islands.

Facing the Allies was the German 19th army with 250,000 badly equipped and shattered troops spread all along the coast, poorly defended with barbed wire, mines and heavy artillery.

As a result of this mismatch, the bloodshed seen on the Normandy beaches was largely avoided as the Germans quickly realised they could not defend their position.

"We underestimate the importance of these landings," historian Jean-Marie Guillon told AFP, adding that they were less well-known than the D-Day invasion because "they went too well!"

For Adolf Hitler, coming two months after the blow of D-Day, it was a debacle.

He would later describe it as "the saddest day of his life," and it led 10 days later to the joyful liberation of Paris.