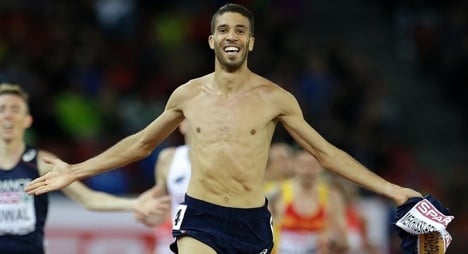 The 29-year-old was initially shown a yellow card after he took off his shirt and then carried it in his mouth as he waved his arms to spectators in celebration.

Worse was to come for Mekhissi, though, as he was then disqualified completely.

His compatriot Yoann Kowal was promoted to the gold medal position instead, although the French delegation can lodge an appeal over Mekhissi's exclusion.

The Spanish team had made the original protest over Mekhissi after a race in which their athlete Angel Mullera had finished fourth.

"I find that the protest lodged by the Spaniards is anti fair-play," said Ghani Yalouzsa, the technical director of the French athletics federation.

In other developments at the Zurich meet on Thursday, Elmira Alembekova of Russia kept up a national tradition when she strode to victory in the 20-kilometre walk.

Under a sunny Swiss sky, Alembekova finished in one hour, 27 minutes and 56 seconds, ahead of Ukraine's Lyudmila Olyanoska (1:28.07) and 19-year-old Czech Republic walker Anezka Drahotova (1:28.08).

Russia had suffered a setback to their title hopes earlier in the week when race favourite Anisya Kirdyapkina, the World Championship silver medallist, was ruled out after being taken to hospital with a fever.

It was a second bitter blow after Olympic champion Elena Lashmanova was suspended for two years for doping.