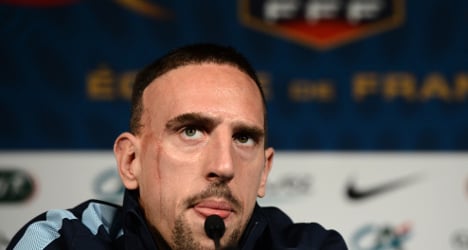 Franck Ribery failed to live up to his early promise. Photo: Franck Fife/AFP

Franck Ribery's decision to retire from international football brings to an end a chapter of his career that more often than not saw him fail to perform to the standard he achieved with his club Bayern Munich.

The brilliance and trickery the winger has shown for Bayern since moving there in 2007 has rarely been on display for France, and it was noticeable in his absence that their performances did not suffer at the World Cup in Brazil in June.

The decision means the 31-year-old – who scored 16 goals in 81 appearances since his debut in 2006 – has closed the door on trying to erase years of international disappointment by seeking a final chance of glory when France host Euro 2016.

He admitted to Kicker magazine – in the same interview where he announced his retirement – that his international career could not be considered a resounding success.

"There have been highs and lows," he said.

While 2013 saw Ribery produce probably the best football of his career, 2014 has so far been an unmitigated disaster.

In a remarkable 12 months last year, Ribery was arguably the star in a Bayern Munich side that won the Champions League, German title, the German Cup, UEFA Super Cup and Club World Cup.

Named as player of the year by European football's governing body UEFA, he was a strong contender for the FIFA Ballon d'Or for the world's best player.

In the end he had to settle for third behind Cristiano Ronaldo and Lionel Messi.

That setback set off a bout of depression and the series of injuries that led to his withdrawal from the World Cup just prior to the start. Inspirational

Ribery, whose face was scarred in a car crash as a child, earned his move to Bayern from Marseille for a then club record fee of €25 million ($33 million) on the back of his finest set of performances for the national side at the 2006 World Cup finals.

There he helped France reach the final where his performances alongside Zinedine Zidane suggested he could have the same inspirational effect on the national side as the 1998 World Cup winner who was to retire after the tournament.

However, that was to prove wide of the mark.

He failed to sparkle at either Euro 2008 or the 2010 World Cup finals where under coach Raymond Domenech's erratic direction the French exited both times in the first round.

To rub salt into the wound, he was also banned for three internationals for his role in the player revolt after Nicolas Anelka was sent home early following a foul-mouthed tirade at Domenech.

Off the pitch, too, he has also been embroiled in controversy.

Ribery and French team-mate and close friend Karim Benzema faced charges of having sex with an under-age prostitute. After a four-year inquiry and a trial, both two were cleared in January this year.

He was also brought to task by former Marseille team-mate Mathieu Valbuena who revealed how Ribery and Samir Nasri, who has also announced his international retirement in recent days, made his life a misery, taunting him over his lack of height.

"Despite it being over I still have a bad memory of what went on," said Valbuena, who more than made up for the absence of Ribery at the World Cup with some outstanding performances.

"To be systematically singled out for bad jokes really hurts."

Ribery said on being told he would not be fit to play in Brazil it was like 'killing his soul' but on Wednesday he accepted that time had moved on.

"You have to know when to stop and the time has come to call it a day.

"And we saw during the World Cup that France have nothing to worry about as far as the future is concerned."