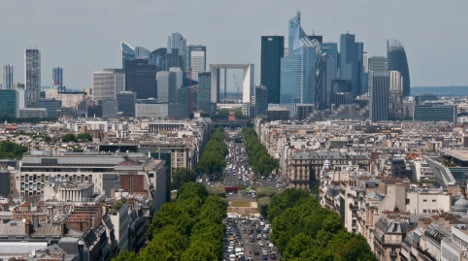 "France gets a bad image from the foreign press, the reality is investors will make money", says the woman whose job it is to attract them. Photo: Pablo Porciuncula/AFP

On a recent visit to New York Chiara Corazza, the woman in charge of promoting Paris abroad, tells a story of how she received sympathy from a taxi driver for having to hand over 75 percent of her earnings to the French tax man.

“I have to tell them ‘I am not paying this rate’. Of course the tax level exists in France but hardly anyone is paying it,” the Director General of the Greater Paris Investment Agency tells The Local.

It’s just one example of how the image of France abroad can often be skewed. More often than not, it’s down to those avid French bashers in certain sections of the Anglo media.

“There’s a huge gap between the image [presented by the Anglo Saxon press] and the reality,” she said. “They are not very favorable to France. It’s cultural and it’s hard to change," says Corazza, who says France needs its own global media presence to boost its image.

The image of France as a country creaking under record unemployment, never-ending strikes, crippling public debt with a population that is increasingly disillusioned and xenophobic is the common narrative presented abroad, and it's fair to say, by elements of the French media too.

But it’s not just a problem of image. In November last year during a televised debate with Paris mayor Anne Hidalgo, Corazzo herself said there was a real “cry of alarm” in Paris because it was losing its attractiveness compared to other international cities. But Corazza is keen to stress, that it's not as bad as the surveys or the press make out. Foreign investors will make money in Paris, she says.

“When investors come here, they discover there is a market here to do business. You just have to tell them to look at the results of investors who have come here in the last 10 years and they will see that most of them have increased turnover by 20 percent.

“When they come to Paris they find the skills and good infrastructure and the telecommunications,” she says. “Energy is less expensive here. They find professional workers who are reliable. They find an efficient state and an efficient administration and they find a good balance between the quality of life and work.”

Corazza also points to the number of French companies like Vinci, Carrefour, LVMH and EDF that are global leaders.

“If things were that bad in France, these companies would leave,” she said.

Corazza, who says she does not take sides when it comes to politics, admits that since being elected in 2012 the Socialist government has at times made her job more difficult.

When government ministers like Arnaud Montebourg start declaring open war with some foreign investors like Indian steel magnate Laksi Mittal or US tyre tycoon Maurice Taylor, it is agencies like hers that are often left to pick up the pieces.

Corazza says Hollande and co are still learning the job and as a result her organization has had to increase its lobbying to try “to convince the government what needs to be done.”

Announced cuts in social charges for companies, easing of visa requirements for Chinese nationals, a plant to create “talent passports” to bring the brightest young minds from abroad, “entrepreneur visas”, reforms to capital gains tax, and the passing of a law that allows more university courses to be taught in English, suggests the government has taken steps to try to boost that image and open the country up to foreign investment.

Paris vs the rest of France

One project that Corazza is naturally keen to promote and believes will massively boost the fortunes of the French capital is the “Grand Paris” project which will see billions of euros invested in development of the Ile de France region, and will include new Metro and train lines.

Several other cities around France, notably Marseille have complained about the billions being invested in the capital, which will only reinforced economic Paris’s dominance over the rest of the country.

“If foreign investors did not come to Paris, they would not come to France. We don’t have a big second city, like in Germany or Spain,” she says.

“Everyone understands that Paris is the engine of France."

PARTNER CONTENT
QUIZ: Which influential Icelander are you?
Url copied to clipboard!