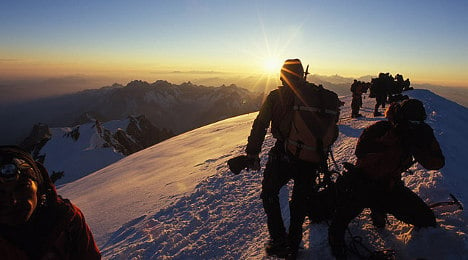 The bodies belong to a group of French climbers, made up of an experienced guide and five trainee outdoor intstructors who went missing on Tuesday night  in bad weather, as they were climbing towards the 3,902 metre Aiguille d'Argentière in the Mont Blanc massif.

Four men and one woman, aged between 30 and 40, had set out with their guide for an expedition organised by France's national association for outdoor sports UCPA.

The alarm was raised at around 4am on Wednesday when the group failed to return to their shelter. Europe1 radio said efforts to rescue the climbers were hampered by bad weather, which prevented the police rescue helicopter from taking off. Local media claimed the guide was among the dead.

Five bodies were recovered from the mountain on Wednesday morning. Later in the day authorities announced that the body of the sixth climber had been found in a crevasse.

Jean-Marc Peillex, mayor of the town of Saint-Gervais which sits at the foot of Mont Blanc told The Local on Wednesday that the deaths "were a tragedy".

"To have so many die in one accident is terrible, and a tragedy for the victims' families. This reminds us that mountains are a harsh, natural environment that obey their own laws," Peillex said.

Peillex said the current weather conditions around Mont Blanc are not favourable.

"It can be a trap, becasue as soon as people see a bit of sun they start climbing, but things can change very quickly at this time of year," he said. "It's very dangerous."

According to reports the trainees were on a "discovery" course which featured the climb to the top of the 3,900-metre Aiguille d'Argentière in the Mont Blanc range. The deaths of the French climbers are just the latest tragedy during a summer which has seen more climbers perish on the slopes of  the famous Mont Blanc range.

In the space of just two weeks between July 15th and July 30th, six climbers lost their lives in the Mont Blanc massif – two Irishmen, two Finnish climbers, a German and a Frenchman. Two Belgians also died on August 2.

Those deaths once again raised concerns over the dangers of Mont Blanc and how climbers underestimate how difficult and treacherous climbing in the range can be.

With some figures quoting up to 100 deaths each year in the entire Mont Blanc range, some consider it one of the most dangerous mountains in the world. But it's a reality that many see as entirely avoidable.

“It’s on the same list that includes going to Mont Saint Michel and getting a tan on one of France’s beaches and the whole thing reminds one of a large amusement park that goes by the name of Disneyland,” Mayor Peillex told The Local recently.

“Mont Blanc is sold like it’s a simple trek, but in reality it’s a high-altitude act of mountaineering.”

The worst single death toll from an accident on Mont Blanc in recent times came in July 2012, when nine climbers – Swiss, German, British and Spanish – were killed in an avalanche. A US climber sparked outrage earlier this month when he tried to climb the mountain with his nine-year-old son P.J. and 11-year-old daughter Shannon.

The family escaped uninjured, but video footage of the incident in a spot known as the "Corridor of Death" caused an outcry when it was broadcast in the US last month.

After the footage emerged Mayor Peillex lodged a complaint with French police against the father.

"If you don't do anything against these people, then they will win," he told AFP.


Watch more news videos | Latest from the US