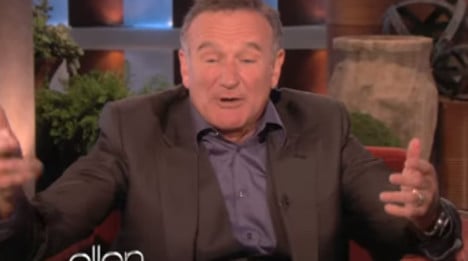 Tributes were paid to Robin Williams in France on Tuesday, after the actor and comedian was found dead in his California home Monday, at the age of 63.

The French dedicated their websites to the Hollywood actor who died after apparently taking his own life . Some sites pointed out that the Williams, a self-confessed Francophile was nevertheless partial to a bit of gentle French-bashing in his comedy routines from time to time.

Williams “loved to make fun of the French and their habits”, said French daily L’Express on its website. “On stage or during interviews, the actor especially loved immitating their accent.”

L’Express, along with several other French media sites, linked to the video below, showing a routine from Williams’ 2002 Broadway show.

In a very passable French accent, the routine sees Williams mock everything from France’s penchant for smoking and underarm hair and their love/hate relationship with Americans.

In this clip in his interview on the American chat show Ellen, Williams takes a humourous swipe at the stereotypical moody Parisian.

Williams first rose to fame in the late 70s sit-com Mork and Mindy before going on to star in numerous Hollywood films including Good Morning, Vietnam (1987), Dead Poets Society (1989), Mrs Doubtfire (1993) and 1998’s Good Will Hunting, for which he won a best supporting actor Oscar.

Despite his light-hearted mocking of the French, Williams himself had French ancestry and was fluent in the language, even giving interviews in French on occasions.

Not everyone in France was a fan of the actor's work however. The far-right National Front's Philippe Martel said Williams famous film "Dead Poets Society" was "toxic" and "stupid".